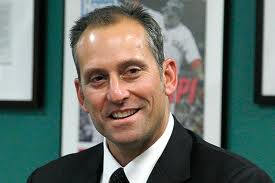 Torey Lovullo looks a little bit like like my Dad, so I wish him luck in not getting the dead end job managing the Cubs.

The headline for this post is misleading because the search for Dale Sveum’s replacement as manager of the Chicago Cubs was comical the moment president Theo Epstein told the media he punted Sveum over beers after the final game of the regular season in St. Louis.

But it sure hasn’t become less silly, has it?

Boston bench coach Torey Lovullo is the guy that the Cubs await.  The Red Sox could end the World Series as soon as tonight, and at that point Lovullo would be able to talk to the Cubs, Detroit, or Seattle almost immediately.  He would join Manny Acta, Dave Martinez, Rick Renteria, and A.J. Hinch.

The perspective Lovullo has brought to his media comments reflect a comically enthusiastic tone as he evaluates one of the least stable managerial jobs in baseball since 1972 when Leo Durocher was shown the door after 6 1/2 years.

“I think that whoever gets to sit in that seat is going to be in a really good situation and one that has stability and a long-term plan in place.  There’s no barriers between departments,” he said. “Player development is the grease that runs the engine. I think that’s what we have here [Boston]. It works. And I know in time [Epstein is] going to build up the same system there.  It’s a long-term commitment. In time, it’s going to be a pretty special place.”

Unmentioned is the complete dearth of pitching at every level of the organization.  How bad are the arms throughout the system?  Epstein was compelled to give Edwin Jackson $52 million over four years to do nothing more than eat innings.

The first question Lovullo should ask is what Sveum did – or didn’t do – that got him fired?

At least we know that Lovullo understands how to kiss a little ass.  In addition to his hyper enthusiastic blather about how ‘stable’ the Cubs’ job is, he said, “I do know there’s a pretty good blueprint in place that’s here, that Theo [Epstein] started.  I know that he sees that it works, so he can take that same blueprint over to Chicago, and it’s going to work.  It’s a matter of time before it works.”

Lovullo should take his insanely optimistic outlook to Capitol Hill to explain the flawed Obamacare website to congressional committees.

If the Lovullo gambit doesn’t bear fruit for the Cubs, and Lovullo should hope it doesn’t because the Tigers gig comes with two top of the rotation arms and the best pure hitter in the last 50 years, the Cubs interviewed Eric Wedge yesterday.

Wedge quit as the manager of the Mariners last month, and was a candidate for the same job when former general manager Jim Hendry hired Mike Quade.  Normally, being passed over in favor of Quade would be an automatic disqualifier, but considering the hiring manager was a buffoon of the lowest order, we won’t judge Wedge because of that.

Teams that Wedge has managed have been good when they were talented, and not good when he lacked talent.  That doesn’t bode well for the Cubs, as they list decidedly toward untalented, and unless Kris Bryant and Javier Baez come north with the Cubs late next March, they will be again.

Regardless, they have nothing reliable in the way of pitching, so this is exactly the same job that was a career death sentence for Sveum.

The truth of the thing is that the Cubs job sucks for all but mediocre retreads without a result strong enough to get a gig with a contender and wide-eyed newbies.  They will hire who they can as a caretaker who will be served a steady dose of daily misery by the untalented and underachieving, and then in two years, it will be time for beers with Theo.

The Cubs can only afford to spend at a middle market level, and need to find the next Joe Maddon.  Too bad every other team in baseball is looking for him too.