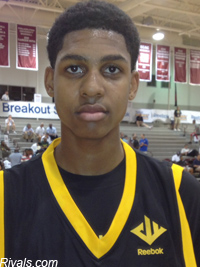 Devin Robinson is 6’8″, skinny, can jump out of the gym, and if the highlight videos can be trusted is a hell of a good shooter.  He announced today that he will attend Florida and play for Billy Donovan.  Indiana fans should wish him well.

Truth be told, I might make the same choice if I were an 18 year-old kid.  No question that Indiana and Tom Crean can develop talent and prepare talented guys for a career playing basketball for the kind of cash you don’t need to hide.  From November through March, I would imagine that Gainesville has more of what I would enjoy than Bloomington, and I’m not talking about the quality of basketball.

If Robinson had chosen East Lansing or Champaign, the explanation would be worth hearing because weather and those vapid enough to chase it wouldn’t be an issue.

Recruiting must be a lot like finding a girl to go to the prom.  With every no, you open the chance that someone will say yes, and provide you a better time than you might have otherwise had.

I get the feeling Tom Crean and his guys had a pretty solid understanding that the Robinson train was about to blow by the station when they received a commitment from Max Hoetzel, another 6’8″ kid who we have been told can shoot.

That one (Robinson) is a five-star rated player and the other (Hoetzel) is a three-star kid is meaningless.  Those who trust the rankings are a little screwy, as those doing the ranking rarely have a solid notion as to who might succeed and who won’t anyway.

James Blackmon, Jr. will announce his choice tomorrow, and whether he picks Indiana or not should have no impact upon the enthusiasm of Indiana fans.  These children deciding where they are going to go to school just isn’t important enough to the success of the program to make a hell of a lot of difference either way.

Recruiting wars are fun to talk about, and I pay attention to them, but the theatrics of a kid sitting at a table with four shirts elevates this decision far beyond its real level of importance.  Not sure when families decided it was best to hold a carnival for an announcement as mundane as where a kid will attend college, but if their son is ever the object of derision on campus, they have no one to blame but themselves.  Ask for fame, and you should be prepare for all of the fallout.  Some of it is good, and some is terrible.  Sitting in front of the media with the drab, “Hey, let me hold up something with a logo on it” routine opens the door for knuckleheads to intrude on your life.

Click here to learn about the pain free dentistry of Dr. Mike O’Neil

Each year, more than a million 18 year-olds decide where they will attend college.  Some of those who are athletically gifted will get a chance to play a sport.  We will be especially interested in those who will play at the school we attended.  Nothing wrong with a little support for the alma mater, but investing hope that the whim of a teenager will fall your way shows a level of passion that is unhealthy.

I hope Robinson gets everything out of the experience at Florida that he has been promised, and that he never regrets the decision for a single second.

I draw the line about caring whether a kid I have never seen play makes a collegiate choice.  Regardless of what school you love, I suggest you do the same.