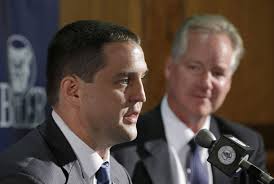 Barry Collier (right) looks on as Brandon Miller talks about being named to succeed Brad Stevens.

What happened to the days when coaches were obviously stooges who said and did the wrong thing so often that we couldn’t believe a conscious athletic director would continue to employ him.  I’m sure they are somewhere, but no place to be found in central Indiana, and certainly not in Hinkle Fieldhouse on the campus of Butler University.

Brandon Miller was the right guy in the right place at the right time when Brad Stevens decided that he was going to live the dream of being the head coach of the Boston Celtics.

Fans of “The Butler Way” have a measure of concern that Miller is going to have problems answering the challenges that come with Butler making yet another leap in conference, overcoming the injury of Roosevelt Jones, and being a first time head coach.  Any of those three tests would be difficult for any coach.  Why should Butler feel good about Miller overcoming all three simultaneously?

Where has Miller ever not succeeded?  As a high school player in New Castle, college player at Butler, assistant coach at Ohio State, Butler, and Ohio, those teams won while Miller was there.

The biggest challenge for any coach has already been met – a successful culture is set, and the guy who built it is Butler Athletic Director Barry Collier.  There is no better guy for a coach to have as a boss than the person who defined what success was for the program when he ran it.

Miller is an impressive guy – very smart, personable, and most important – fueled by whatever helps his players to become better players and teammates.  The more I talked to him today, the more similar to an outstanding manager for any business he seemed.  Obviously, his business is leading college students to battle with precision in front of more than 10,000 people against similarly talented teams, but he spoke of the fun of seeing his kids improve, I thought about the part of being a program director that I loved – helping people do better work.

I also thought about all the crap that I did not like, but this is about Miller, not my aversion to those hours that I felt my time was wasted.

For all the reasons listed above – the leap from the Horizon League to Atlantic 10 to the Big East in successive seasons, Jones injury, and Miller learning on the job – fans should ratchet their definition of a good season down to a logical level.  That means to enjoy the wins, find reasons for hope in the losses, and know that brighter days are ahead.

ESPN picks the Bulldogs to finish sixth in the conference.  I guess that makes sense although in the first season of a conference that has never existed as currently constituted, it seems silly to make any guess.  I don’t believe Miller has any idea how good his team might be, so how are a couple of analysts supposed to make a reasonably well-informed guess?

Marquette has a good chance of winning the Big East, and if history is any guide, DePaul will finish in the cellar.

Miller will be a guest this Saturday on “Ahead of the Curve” with Chris Hagan and me at 1p on 1070 the Fan, an hour prior to the tip of Butler’s second and final exhibition at Hinkle Fieldhouse.  The interview will be posted at kentsterling.com immediately after it airs.

One question that will not be asked is whether succeeding Brad Stevens will be difficult.  Succeeding Stevens isn’t difficult for Miller, but answering questions about it either has become difficult or it will be soon.  Miller will not be wearing a WWBD bracelet when the Bulldogs play DePauw or any other team on its schedule.  Leading is leading, regardless of who preceded you, and Miller will lead.