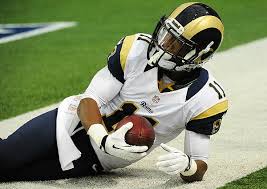 Rams wide receiver Tavon Austin spent far too little time on the ground today for the Colts to beat the Rams this afternoon.

The last time the Indianapolis Colts were beaten by 30 or more points at home against a team that did not qualify for the playoffs was November 29, 1993.  The San Diego Chargers behind Stan Humphries and Marion Butts beat Jeff George and Jessie Hester 31-0.

Today, they lost 38-8 against a 4-6 St. Louis Rams team that appeared ripe for the picking (and very likely to avoid the postseason).

The Rams picked a good day to unleash their top rookie, who has toiled in virtual anonymity for the first nine games of the season.  Tavon Austin stopped looking like an overhyped dud, and took off through the Colts secondary and special teams like the lightning quick stud the Rams thought they were getting as the #8 overall pick in the 2013 NFL Draft.

Austin totaled 310 yards of total offense and three touchdowns in his seven touches (two catches, four punt returns, and one kickoff return), and that was that.  Sure, Andrew Luck played like everyone thought Rams QB Kellen Clemens would, and Clemens played like the Lucas Oil throng expected Luck to, but this game belonged to the recently impossible to corral Austin.

Clemens threw to Austin only twice, but both resulted in TDs, and netted 138 yards.  Austin added a 98-yard punt return for a touchdown that he originally waved off.  Overall, Clemens had a career day, completing only nine passes in 16 attempts for 247 yards and the two TDs to Austin.  His gaudy quarterback rating was an astonishing 140.6.

Conversely, Luck looked very ordinary for this one day going 29-47 for 353 yards, one TD, three interceptions, and three sacks.  He is without a doubt the best young quarterback in the game, but every once in a while the worst circumstance meets the worst matchup, and the result is dismal even for the game’s stars.

This historic loss for the Colts was not all on Luck’s oddly substandard day.  The defense was woefully ineffective in stopping any aspect of the Rams heretofore decidedly unscary offense.  Cornerback Vontae Davis looked downright disinterested throughout the game, and the result was efficiency bordering upon explosiveness for the Rams.

The Rams came into the game reeling after a three-game losing streak with only this seemingly meaningless game between it and the bye week.

It’s easy to overlook the Rams.  They haven’t had a winning season in a decade, and have been as predictable in finding ways to lose as the Colts have been in finding ways to win, but the defensive effort two weeks ago in a 14-9 loss to the Seahawks yielded only 135 yards of total offense, and last week’s 28-21 loss wasn’t all that awful.

Rams defensive end tallied two sacks including a sack fumble that was returned for a touchdown by fellow DE Chris Long.  Quinn is the second highest graded defensive player in the NFL behind J.J. Watt, and that play showed how disruptive he can be by beating both offensive tackle Anthony Castonzo and tight end Coby Fleener to get to Luck.

One area of ongoing concern for Colts fans is in watching running back Trent Richardson run.  Today, Richardson ran five times for a total of two yards.  There is no doubt that the interior of the Colts offensive line isn’t opening the holes Richardson grew accustomed to running through at Alabama, but as one well-informed voice in the press box today said, “Richardson runs like his shoes are too small for his feet.”

There is no turning back the clock to play this game a second time. so all eyes in the Colts offices tonight (and they will be there late) will be on the opponent for Thursday night’s nationally televised game against the Tennessee Titans.  The Titans didn’t enjoy themselves today, losing at home to the woefully bad Jacksonville Jaguars.

If the Colts win Thursday in Nashville, they will open up a three-game lead in the AFC South with six to play – in other words, it’s lights out.  That’s the prize that matters, and having one home game against each divisional opponent – divisional opponents they will have already beaten on the road – should bring an early end to the drama of who will hang that banner.

Every NFL team will face adversity during a season, and how the Colts respond to whatever the hell it was that happened at Lucas Oil Stadium today will determine whether they are ultimately successful.

The two questions that require immediate answers are whether Richardson is just not cut out to be a successful NFL running back, and just how much the injury of Reggie Wayne means to Luck’s ability to move the offense.

The Colts are no stranger to adapting as the injuries to their most talented offensive players have mounted.  Vick Ballard, Ahmad Bradshaw, Dwayne Allen, and Wayne are all shelved for the season, and they are still 6-3.

Making do with what they have has been a recurring theme for the Colts, but today’s loss was a little different in that there was no hope at any point for a result other than what was achieved.  It was either a bizarre and unpleasant anomaly, or a sign that the Colts have given all they have to give, and that limping toward December is a grim reality.