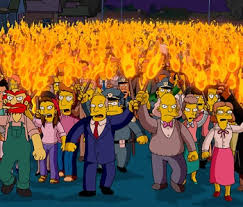 This would have been the scene on 56th Street had Andrew Luck been injured after the loss against the Rams had been assured in the third quarter.

The only good news for Colts head coach Chuck Pagano yesterday was that quarterback Andrew Luck left the game healthy after being subjected to punishment from the Rams for three series too long – THREE!  The game was in the bag for the Rams after taking a 38-0 lead with 5:15 left in the third quarter, but out came Luck with the rabid defensive ends Robert Quinn and Chris Long, who wanted nothing more than to separate Luck from his senses.

Luck scrambled three times, and was sacked once before being pulled with 5:24 left in the game.  If he had been injured, Colts fans would have marched to the Colts Complex on 56th Street with torches demanding justice against Pagano, and they would have been right to.

With the spate of injuries to talented skill position players, the only asset that keeps the Colts from being a very ordinary team is Luck.  Without him – much like all those years with Peyton Manning – the Colts are fighting for a top five pick in the draft rather than a division championship.  Anyone want to go through another 2011?  If Jim Caldwell were still the coach, Luck would have been encased in bubble wrap on the bench after the Rams took a 38-point lead.

The Indianapolis Colts might very well have had the worst result in their history yesterday.  They have been beaten by 30+ points a few times, but rarely at home, and never as a likely playoff team at home against a team going nowhere.  But the franchise is intact to compete Thursday in Tennessee.

This is the Colts 30th season in Indy, and that has never happened.

It is likely a very good thing that Luck and Vontae Davis have to wake up this morning thinking only about the upcoming game where they can salt away the AFC South against the Tennessee Titans.

I’m not sure whether cornerback Vontae Davis allowed himself to be hypnotized during a magic show Saturday night, but the only other explanation for his low level of play on two Tavon Austin touchdown receptions are injury and apathy.

Until yesterday’s three touchdowns, it had been eight weeks since Austin’s last visit to the end zone.  His high water mark for yards receiving in a game was 47.  Yesterday, he popped free for 138.

Through the entire season, Austin had returned 26 punts for a total of 123 yards.  He more than doubled it with 145 on four punts yesterday.

How all that happened has been the focus for the coaching staff since the game ended, and it will be a focus of the preparation for Thursday’s Titans game.

Pagano has been a huge proponent of building a team focus that values consistent execution, and it appeared that all 53 players and the coaching staff were eager to buy in until yesterday.  Now, the question becomes whether yesterday’s show was a freaky departure from the norm – an evil anomaly brought on by wacky biorhythms and a confluence of one time events – or a signaling that the unraveling of a season threatened by injury and fatigue.

There should be no such thing as a trap game in the NFL, but it sure looked like after beating the playoff bound San Francisco 49ers, Denver Broncos, and Seattle Seahawks, the Colts saw the Rams as easy prey.  When you underestimate a talented group of underachievers like the Rams, it’s done at great risk.

I’m not a gambler, but I’m bet nine-point underdogs have only won by 30 or more points a handful of times in the last ten years.  Surprises like this won don’t happen very often in the NFL, and there is a reason for that – people inside the NFL know that the difference between 10-6 and 6-10 is razor thin.

So now it’s up to Luck, Davis, and the rest of the Colts to shed the shame of the historic beatdown to bounce back in a critically important game against the only meaningful challenge left to a division championship.

More potential good news is that Titans quarterback Jake Locker is lost for the season after an injury yesterday during a loss to Jacksonville.  Or is bad news.  It might be another reason for the Colts to take lightly a team relying upon a much maligned backup quarterback.  The Colts made Kellen Clemons look with an all-pro yesterday, and Fitzpatrick is another QB who needs to get well.

Regardless, Colts fans can breathe easier today because Luck is not the latest of the many NFL quarterbacks who have lost significant parts of their season to injury.