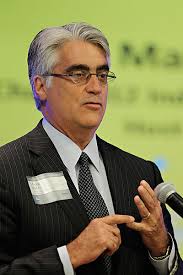 Fans should be overjoyed that Mark Miles is committed to fixing what is broken at the Indianapolis Motor Speedway.

Very little about qualifying for the Indianapolis 500 has made sense over the years.  The only reason it continued with a similar qualifying format from year-to-year was because that was the way it had been done before.

There is no punier reason for opposing change than loyalty to the status quo.

Hulman & Company CEO Mark Miles has proposed moving the run for the pole for the Indianapolis 500 to the end of the Sunday qualifying session that used to be reserved for car owners trying to bump their way into the field.  Bump Day became moot years ago when meaningful bump attempts stopped.

The misery of Bump Day’s lack of bumping was that it was televised, showing the fringe audience who tuned in how ridiculous management at the track was.  Two hours of television showing nothing of interest cemented in people’s minds that the Indy 500 was an event whose greatness had passed, and that the most hallowed ground in auto racing still had a heart, but was minus a functioning brain.

Qualifying was altered a few years ago by having all cars attempt to qualify as always on Saturday as soon as the track opened.  Then, the fastest nine would roll out again in reverse order at the end of the day to set their positions one through nine for the race.  It was a contrivance, but the point was to keep the few people who ventured to the Indianapolis Motor Speedway to watch.  That left nothing of interest for Sunday.

If Pole Day attendance has diminished over the past 25 years, it has completely evaporated on Sunday.

The point of any event that invites fans to pay for attendance is to entertain them until the end.  It has never made sense for fans to know who won the pole two hours after Pole Day qualifying started.  It’s like the climax to the action in a novel being resolved midway through the third chapter.  What kind of a nut would continue to slog through “Gone With the Wind” if Rhett told Scarlett to get bent with 300 pages to go?

The Miles plan, according to the Curt Cavin post on indystar.com, is for all cars to qualify on Saturday, set the order early Sunday, and then have the fastest nine run for the pole at the end of the Sunday session.

The point is to try to keep people in the stands and in front of their TVs through the end of the weekend, which makes sense.

No matter the changes, the national passion for the race continues to slide.  It’s been a long time since American sports fans have cared at all about the Greatest Spectacle in Racing, and no amount of qualification format change is going to matter.

But at least someone at 16th and Georgetown is thinking about how to re-engage an audience, and saving the climax until the end of the weekend is a smart first step.

The fans who are filling Cavin’s email box with angry invective toward Miles and his creative efforts to re-imagine the Month of May ought to save their indignation.  Miles might be the last best chance to save the Indianapolis 500 from the dustbin of failed treasures of our culture.

Next, for the love of Philo Farnsworth, let the next step be to televise the Indy 500 locally!  There is not a single sporting event whose attendance gets a bump from a blackout.  NFL teams buy the remaining tickets themselves rather than allow a blackout.  The Chicago Blackhawks drew 3,000 fans per game right before the blackout of home games was lifted.  The United Center is full of rabid Hawks fans now.  The team is much improved, but there is no evidence to suggest that the blackout was a sufficient disincentive to rally ticket purchases.

The Kentucky Derby is run in early May, and the crowds are huge.  It’s televised in a smaller market than Indy.  People have huge parties where those who don’t attend watch the race.  Here, those who have no interest in the race are never given a push toward developing interest.