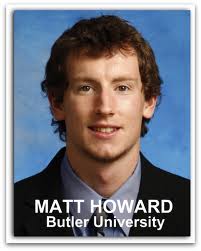 Matt Howard is no longer the kid he was when I met him as a sophomore at Connersville High School, but in so many ways he is exactly the same guy.

After playing summer basketball on the same team as my son, Matt attended Butler, led the Bulldogs to consecutive National Championship games, took full advantage of the education offered at Butler, and is now making money for playing the game he enjoys.

His attitude toward life is completely different from almost anyone I’ve ever met.  Matt’s gift to Butler was in believing that five guys over here could beat five guys over there regardless of what the media says.  That’s the way he has always been wired.

Doing it as others have done it is not Matt’s way, and those who have tried to impress upon Matt the need to covet what might impress others have been disappointed.

Many people who are truly unique exhibit quirks that border on dysfunctional.  Matt’s uniqueness is in being very sane and logical.  He makes those around him better, and that’s why Butler one day should erect a statue of his likeness outside Hinkle Fieldhouse.  Many have tried to live up to the Butler Way.  Matt took it to a new level.

There is always something to learn from Matt, and so talking to him for 15 minutes didn’t seem like overdoing it.