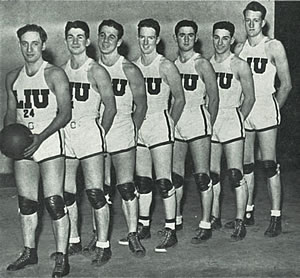 I don’t believe any of these guys have eligibility remaining for tonight’s game, but fans wouldn’t notice if they played.

Somehow or another, every FBS program in college basketball has decided that it’s wise to schedule an endless stream of patsies at home prior to conference play.  It cheats the fans, the game, and the competitive spirit that college basketball is supposed to embrace.

Indiana will play LIU-Brooklyn tonight at Assembly Hall in front of rabid fans hoping to see meaningful basketball.  What they will get is a scrimmage between a team that needs to take some live batting practice and another team that knows its job is to groove those fastballs.

If the game is competitive, Indiana fans will see it as a portend of horror when the fur flies for real on New Years Eve against Illinois.

Indiana is no different from any other major college program.  They play the easiest home schedule they can because home losses in November come back to bite you in the ass come March as the NCAA committee sits to evaluate which at-large teams fit in the field of 68, and because home games mean significant money.

The victims are the fans who buy season tickets, and are forced to buy Samford in order to get Michigan State.  The dynamic is very similar to cable packages.  I watch sports 95% of the time on TV, but in order to get all of that programming, I have to buy access to hundreds of networks in which I have no interest.

It’s also very similar to the preseason NFL games that are must buys for season ticket holders.  They are meaningless and have no value to ticket holders, but there is no way to opt out of buying the Bengals vs. Colts in August if you want Broncos & Peyton vs. Colts in October.

The non conference home schedule for Indiana includes games versus opponents whose acronyms I don’t recognize, like UNF – which I assume is North Florida.  Let me click on it – yes, I was right.  The Hoosiers will play the University of North Florida Ospreys on December 7 at Assembly Hall.

The Hoosiers also play the Blackbirds, (not Georgia) Bulldogs, Seawolves, Purple Aces (that one I know is Evansville), Grizzlies, Colonels, and (not Temple) Owls.  If you can tell me which schools pair with those mascots, you are the sports information director of a division one university.

This isn’t an Indiana University problem.  The majority of programs stay away from playing real competition home and home because it makes no economic sense to do so.  It’s much better to play more home games against teams who happily accept tip money for their trouble instead of demanding a return game.

Click here to see the best dentist in Indiana – a graduate of the IU Dental School – Dr. Mike O’Neil

The fans will pay to watch their favorite team play five hobos (one of the few nouns currently unclaimed by a college for its nickname), so why risk a loss and forfeit cash?

Just like my stupidity in continuing to pay my television content provider for networks like Nickelodeon, AWE (whatever the hell that is), OWN, MTV, Animal Planet, and hundreds of others, the collective ignorance or indifference of season ticket holders for college basketball drives the very behavior that we complain about.

When fans stop being sheep, the athletic departments of universities will stop abusing loyalty.

It’s hard to blame FBS schools for cashing in on our idiocy when we are unwilling to change our behavior.

You know when the NFL will change the preseason schedule? When fans stop reporting for duty to watch the slop.  Until consumers wise up and modify their behavior, there is no reason for coaches and athletic directors to change the construct of their schedules.

The question fans need to answer is whether fans want half as many great home games as those blowouts they currently get to see, or the maintenance of a schedule with meaningless games against unknown and unworthy competition.

I’ll be in Bloomington for the game against the Blackbirds tonight, and so will 17,000 Hoosier fans who seem not to give a damn whether Indiana tees it up against Long Island University-Brooklyn or the Long’s Doughnuts All-Stars.

As with so many annoyances today, it is what it is – until we decide that it shouldn’t be anymore.

13 thoughts on “Indiana Basketball vs. LIU-Brooklyn Tonight; as With Most FBS Home Schedules, Something Needs to Change”