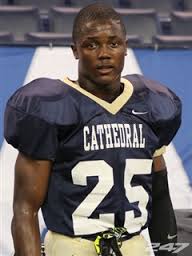 Twelve dreams walk into Lucas Oil Stadium this weekend, and six come true.  Three were granted last night, and three were dashed.  Three more will be deigned worthy today, and three others scoffed at by the football gods.

From the time these young men were eight years old, they dreamed of this moment.  And this weekend it comes.  In their minds, the result of this seminal day will serve to define their pre-college existence.

There are seniors on all 12 of these teams who are very aware that their football careers will end after this weekend.  This will be the last time they are taped, put on their pads, and strap on their helmets.  It’s also the last time they will converge around a coach and huddle with the best friends they are likely to have.

These teammates become brothers through their sacrifice for the common goal of successfully competing.  The endless hours in the weight room, practice in the cold and wet, and challenges both met and lost forged a bond among teammates that never diminish – ever.  At the 25 and 50 year reunions, they will convene, look each other in the eye again, and know each of their brothers in a way those who compete cannot fathom.

And all we have to do is buy a ticket to be able to watch this final chapter play out three times today, just as we could have yesterday.  It’s not an entry fee; it’s a gift.

That is what every state championship is, regardless of the sport.  It’s a gift, a challenge, a goal for which people work with their friends for the majority of their young lives, and the rewards aren’t necessarily the championships but those moments in life where the eyes lock as they did so long ago when brotherhood was formed.

I am working as a sidelines reporter for the IHSAA Champion Radio Network, and I get to see it up close – the love and admiration the coaches feel for the players, the hope in the eyes of the players, the end of the hope when it becomes obvious that the cherished dream is not going to be a reality, and the joy in the knowledge that it will.

Click here to learn about Dr. Mike O’Neil – the best dentist in Indiana, who wants to be your dentist

I get to talk to the coaches at halftime and following the game to get their immediate reaction, and look into the eyes of the young men as they prepare to battle.

A missed tackle, errant pass, a plant foot placed too close or distant from the ball, a hold that lasts too long, or pre-snap flinch is sometimes all that separates winning and losing.  Precision and ferocity are required, but too much of either can ruin a team.

The other 10 players count on your performance.  If any one fails, the team fails.  Do it right fifty times on both sides of the ball, and you celebrate.  Fail, and the silent bus ride back to the school is the last time you will all be together.

A short lifetime of work comes down to two-and-a-half hours of controlled chaos.  Family, friends, and classmates are all emotionally vested in the result, and letting them down would be a terrible burden.

I’m privileged to help tell the story of these kids and coaches from Warren Central and Carmel who will vie for the 6A championship on the radio network, and you can drive down to Lucas Oil Stadium to see it for yourself or listen.  Seeing the dichotomy of one group of teenagers elated at the attainment of a championship and another who were able to come so close only to be denied by minuscule imperfections.

Such is the pass/fail world of sports, but while the losing denies a trophy that will gather dust for generations in the school’s display case, the real rewards aren’t seen on the scoreboard, but in the eyes of the players as they meet all those years later.