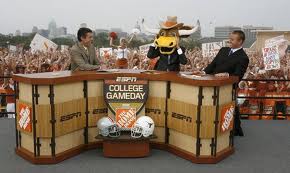 I started working on a piece involving the Pacers and scenarios for how they deal with Danny Granger, but I couldn’t get a handful of other sports topics out of my head this morning. I’ll elaborate on the Pacers/Granger in a separate column soon, but it’s Saturday morning and a perfect time to once again hit the express checkout with a mixed-bag of fresh sports topics and thoughts.

ESPN’s College GameDay is live from Pan Am Plaza as we speak. While Indianapolis doesn’t need a show like this here to validate our town’s sports awesomeness, it is another cool happening that fits nicely into Indy’s massive sports landscape. Seriously, how fortunate are we to have one major sports event after another like the Big Ten Championship game? Pound for pound Indianapolis is the best sports town in America. Don’t let some blow hard from a big city tell you otherwise. We may not have the four major sports but we fill the gaps in with major races, Super Bowls and other events like this weekend. And we do it better than anyone. I’m always proud to live in this town. Ok, onto the games:

Missouri vs. Auburn: Am I the only one who thinks Missouri has a legitimate shot at winning this game? No, I mean a REAL legitimate shot at winning this game. Auburn is the flavor of of the week in college football right now. They deserve to be. Auburn has given us the two most exciting finishes in college football this year – in back-to-back weeks at that (stunning victories over Georgia and Alabama). But I’m also realistic enough to know that Auburn is very close to having three losses right now. Missouri’s SEC schedule has not been as challenging as Auburn’s, but Mizzou’s only blemish is a double-overtime loss to South Carolina when Mizzou was without senior captain QB James Franklin. Doesn’t it feel like there’s too much hype for Auburn right now and not enough love being thrown Missouri’s way? There is, that’s why I’m going with the Tigers from Columbia not Auburn.

Bowling Green vs. Northern Illinois: If I had written this prior to last night, I would have told you that Bowling Green had a legitimate shot at winning this game…seriously. I didn’t think they would flat-out beat them down, but I wasn’t all-in with NIU. I watch more MAC football than anyone I know, so I’m very familiar with all of the teams. I strongly believe Ball State would have beaten NIU given a more aggressive play-calling approach from the coaching staff. Bowling Green knew the Huskies’ biggest weakness (the secondary) and attacked it relentlessly. And BG has a good defense by MAC standards. So, basically it was BG’s average offense/strong defense versus NIU’s porous defense/strong offense. It’s the same scenario in my mind as the Ohio State/Mich. St. game. The reasons I feel Michigan State has a legitimate shot to win are the same reasons I felt Bowling Green had a legitimate shot to win. It sucks for the MAC to lose out on another BCS bowl game, but NIU would’ve been badly exposed in a game like that.

Reports this week have Ball State coach Pete Lembo interviewing for the Wake Forest job (and probably others, I’m guessing). Overall, I am sick of this aspect of college football: coaches allowed to leave before the season is over. If bowls are so important like we are always told they are, then why is the season considered over and coaches allowed to shuffle around before the bowls are complete. I understand it’s because of the recruiting calendar. Then change the recruiting calendar. Teams like Ball State don’t have 12-0 (2008 regular season) and 10-2 seasons very often. Allow these programs and their fans to properly see seasons like this to fruition before having them unravel due to coaching rumors/movement before the season is done. In 2008, speculation of Brady Hoke leaving started prior to the MAC Championship game. It no doubt had an impact on the team. A team that had rolled everyone that season lost that title game and the bowl game following. NIU lost it’s coach last year prior to them playing in the biggest game in school and conference history, the Orange Bowl! It doesn’t feel right and seems like it could all be avoided by changing the calendar so coaches don’t need to leave (or can’t leave) for another job until January.

Ok, I have to hurry this along and get it published because everyone on GameDay just picked Missouri, making me look not so original with my picks. BUT if you want to get up to speed on everything NBA to date, I HIGHLY ENCOURAGE you to watch the four-part Grantland special hosted by Bill Simmons and Jalen Rose called “Bill and Jalen’s 33 Day Recap: The First Birdmester!” It’s long but very, very entertaining and informative. Due to Rose and Simmons’ affinity for Larry Bird, it’s appropriately titled after Larry Legend himself, which they explain early on. Part 1 below includes much love for the Pacers. Watch all four parts as they do a great job of uniquely covering the league from every angle. It’s great stuff all the way through. The Pacers are featured in various parts but you can quickly get your Pacers fix by going to the four-minute mark of Part 1.

I Leave You With This: A Mark Boyle Quote

There are few announcers that entertain me more than Pacers radio play-by-play man Mark Boyle. A few weeks ago, I was out working in the yard and listening to the Pacers-Pistons game on the radio. At some point during the first quarter, Mark Boyle said about the Pistons’ Josh Smith (and I’m paraphrasing a tad, but not much):

“Smith hoists a three..and that’s unfortunate if you’re a Pistons fan because Josh Smith is NOT a good three-point shooter. You know, if you asked a girl out 100 times and she turned you down 99 times, sooner or later you would think you’d figure out you’re not a ladies man. The same principle applies to three-point shooting.”