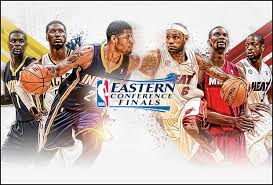 All the media driven consternation over whether LeBron James was going to play was just that as he appeared to suffer no ill effects from a tweaked ankle during the Miami Heat’s 97-94 comeback win tonight against the Indiana Pacers in Miami.

Pacers forward Paul George is a good player who may evolve into a great one, but James left no doubt tonight who wears the king’s crown in the NBA.  James’ plus/minus was +16 to George’s -7.  It didn’t help that Roy Hibbert picked up his fifth foul with 8:33 left in the third.  Hibbert’s absence gave the Heat the ability to drive and finish or dish, and that turned the game although the Pacers biggest lead grew to 15 points three minutes later.

If the Heat were good to their word that this was just another game, the Pacers would have coasted to a win, but like happened in last year’s Eastern Conference Finals, when the time came to fight or lay down their weapons, the Heat reloaded and went to work.

As nauseating as it is to watch Heat fans celebrate a win tonight, the Heat were the better team when it mattered, and if George believes a referee like Joey Crawford is going to call a foul on James for having a hand on his hip as he takes a last second shot to tie, he hasn’t been watching the NBA for very long.

It’s not that George wasn’t good – he was.  Scoring 25 with eight boards and six assists almost exactly duplicated James’ 24 points, nine boards, and seven assists.  In fact, both hit eight field goals and seven foul shots, and committed three turnovers.  James had three steals to George’s two, and George committed one more foul, but when the game was on the line, James made the plays on both ends to change the result.

If this was a preview of the 2014 Eastern Conference Finals, sign me up for tickets to all seven games – and there will be seven.  These teams raise the bar for competitiveness in the league, and makes the two-and-a-half hours each of these games last an absolute joy.  There is no doubt that both teams save their best for the other, and are very aware that a championship will come only after vanquishing the other.

It’s a little early to irrevocably claim the irrelevance of the other 13 teams in the East, but since the injury to the Chicago Bulls Derrick Rose, that’s exactly the sad state of affairs in that half of the league.

It’s a shame that these two teams won’t play again until March, as if we needed another reason to hate winter, but the two games left will be all-out wars the likes of which we don’t see often in the regular season, so we should look forward to them rather than lament their scarcity.

By the way, Dwyane Wade was pretty good tonight too, but even scoring 32 points on 15-25 shooting, James’s shadow made it almost impossible to see his contribution.

How good was the effort at both ends?  The two teams totaled 11 offensive rebounds on 81 missed shots.  That means there were a lot of guys doing exactly what they were supposed to with some serious fundamental vigor.

People who whine about the quality of hooping in the NBA must not be watching, or at least they weren’t watching this game.  There might have been a time when the NBA was dull and the effort lacking, but those days are about 35 years past.

This was a great basketball game played by different teams built in different ways at different points in their evolution.  There will be additional chapters written – probably nine this season, and I can’t wait to see how they unfold.