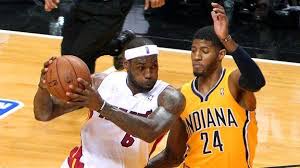 LeBron James won a lot of battles to lead all scorers with 38 points, but the Pacers won the war.

What a basketball game.  What it lacked in beauty and rhythm – and it lacked both entirely – the Pacers and Heat made up for in drama.  The game came down to a play coach Erik Spoelstra drew up for Chris Bosh.  Yes, Chris Bosh.

With two seconds left, LeBron James on the floor, and the game in the balance, Spoelstra had James pass to Bosh, who missed badly.

This was to basketball games as James Michener novels are to literature.  It was long – nearly three hours long – but no one leaving Bankers Life Fieldhouse were complaining.  Not after the Pacers won this prelude to the Eastern Conference Finals.

I hate to completely discount the possibility of one of the other six teams that will qualify for the playoffs out of the East advancing, but barring some heinous series of injuries, it’s not plausible, and would be an injustice to fans who want to see a whole lot more of this.

The game was a war where neither team ever gained separation or dominance.  Just when the Heat looked a little gassed at the end of the first quarter, they roared back to life and threw some punches of their own to take a one-point halftime lead.  When the Heat seemed to take control at the end of the third and beginning of the fourth to build a 70-63 lead, the Pacers got in their shots to the liver that wore down Miami.

Tonight’s win clinched a second straight Central Division championship for Indiana, and according to Number Fire, improves their probability of capturing the #1 seed to 84%.  Had they lost, it would have been 49%.  None of that amounts to a hill of – um- beans with 10 games left in the regular season, including another game in Miami against the Heat, but it sure beats losing.

A loss tonight would have been a death knell for the Pacers season.  Bosh hits the shot, Indianapolis loses faith and believes this team is on the brink of collapse.  But the shot misses, and now fans are talking championship again.  Such is the life of a Pacers fan.

The Pacers absolutely had to have this one, and the Heat, secure in their knowledge of how to win a championship did not.  The emotional fragility of the Pacers got a little duct tape tonight, and the Heat will got on their charter knowing that whether Game Seven is in Indy or on South Beach, they will bring fight to that party when it happens.

Tonight, it was Roy Hibbert with 13 in the first quarter, and Paul George with 15 in the second half to lead the Pacers to a hard fought and earned triumph in front of another sellout crowd.  The 10 turnovers were a nice, manageable number for a team that has shown a penchant for giving up the ball too often and too carelessly.

Basketball fans are in for a treat in eight weeks.  In the meantime, the Pacers travel to Washington and Cleveland to try to finish this marathon of a season strong.