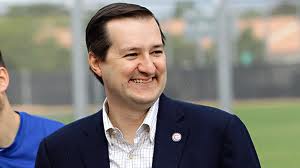 Cubs owner Tom Ricketts is laughing all the way to the bank every time you buy a ticket.

Sadly, firing the owner of a sports franchise is impossible.

Cubs owner Tom Ricketts has vaulted himself into the conversation as one of the worst owners in sports, and is closing in on late Blackhawks owner Bill Wirtz as the worst in the long and strange history of Chicago professional athletics futility.

On a day that Cubs fans used to look forward to as one of the few when reasonable hope could be justified, all positive feelings have been sapped by Ricketts and his family’s unquenchable thirst for profit.

The Cubs ended last season with the third highest average ticket price in baseball, and begin this season with the 23rd highest payroll.  Fans keep pouring through the turnstiles at Wrigley Field, as the true star attraction of the team celebrates its 100th birthday, but the always silly notion of optimism is gone.

Fans should respond by taking the year off.  Don’t buy a ticket.  Don’t attend a game using someone else’s tickets.  Tell your son that he will not be pulled out of school one day this spring to head to Wrigley for a father-son afternoon.

For just one year, penalize Ricketts and his family for their profiteering.  Cubs fans have been preyed upon enough without Ricketts charging fans top tier ticket prices to watch the 23rd highest payroll toil and fail.

The late Phil Wrigley owned the Cubs from 1932 until his death in 1977, and the disappointment came year after year, but ticket prices were always reasonable ($3.50 for the most expensive box seat, and $1 for bleacher seats).  Twenty-two thousand tickets went on sale the day of every game.  Sure the Cubs sucked more often than not, but a trip to Wrigley didn’t break a family budget.

Ricketts is not only breaking family budgets but records for futility, and for that he must pay a tariff.  The only people able to enforce that penalty are the fans.

As painful as it is, for one year stay away from Wrigley Field.  Postpone for one year the pilgrimage to the place where you have so many wonderful memories with grandparents, parents, brother, sisters, children, and grandchildren.  Of course, it hurts, but it’s the only tool at our disposal to motivate Ricketts to deliver a reasonable product.

When you hear Cubs president Theo Epstein tell Dave Kaplan on Comcast Sports Chicago about how the minor league system in bursting at the seams with talents, shout at the TV that you will make the drive to Iowa to watch them instead of going into debt to watch the sad collection of mopes he has gathered in Chicago for your displeasure.

Click here if you want to great dental care without pain from the best – Dr. Mike O’Neil at Today’s Dentistry

As Ricketts considers offering stock to fund the Wrigley Field renovation, laugh at his face.  If he didn’t have the cash to invest in the team’s infrastructure, he never should have bought it in the first place.  The value of the Cubs has jumped $350 million since he bought it.  How about using some of that money to erect the precious video screens that will generate the ad revenue that he covets.

For Cubs fans who want answers as to why this sad excuse for an owner was welcomed into the brotherhood of baseball owners instead of the brilliant Mark Cuban, you need to look no further than the owner’s suite at 35th and Shields.  At the time of the purchase, a former owner of a major league franchise told me their was no way Jerry Reinsdorf would allow Cuban into baseball.  He’s a big enough headache as an NBA owner, so Reinsdorf and close friend Commissioner Bud Selig worked to block the Cuban bid.

Okay, Jerry, you win.  Chicago is becoming a White Sox town by default.

The only recourse is to refuse to financially support a robber baron.  Cubs fans deserve better, unless they continue to buy tickets and concessions.  In that case, crappy baseball is exactly what they will continue to get.

Celebrate Wrigley Field’s centennial by forcing Ricketts to pay for players worth your allegiance.