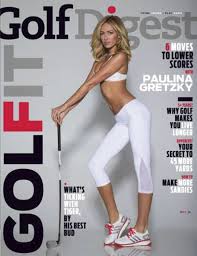 Paulina Gretzky on the cover of Golf Digest is softening my disdain for women golfers.

I have to admit that when I first saw the cover of Golf Digest that has many LPGA tour pros upset, I assumed Paulina Gretzky was a hot chick pro like Anna Rawson, Belen Mozo, and Natalie Gulbis.

Turns out, her only claim to fame is as the girlfriend of PGA pro Dustin Johnson and the daughter of hockey hall of famed Wayne Gretzky and Janet Jones of “American Anthem” fame.  (If you went to college in the late 1980s, you saw Jones in that movie about gymnastics on an almost constant loop on HBO.)

Regardless of her lack of credentials in the golf world, there she is on the cover.  The last LPGA member to be feted in the same way was Lorena Ochoa in 2008.  Nothing against Ochoa, but my money is on this issue of Golf Digest outselling the 2008 edition with her mug on the cover.

Publishing is a business, and this decision was made the same way all others are – by what moves product.  Gretzky showing skin, or Inbee Park – the best female golfer on the planet – in her traditional sweater vest.  Which do you think is more likely to prompt a business traveler to pick up a copy in the airport?

The comments from LPGA members from USA Today combine resignation and angst:

Stanford hits the nail on the head, while Park amicably concedes.

Golf Digest is not puffery produced to promote golfers.  It’s a for-profit magazine that needs to move product in order to survive, and if putting some hot chick in a bikini top on the cover moves product, that is what will be done.