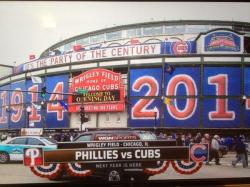 The Ricketts turned Wrigley into a realtor’s signage wrapped minivan for Opening Day.

Current Cubs owner Tom Ricketts has brought unprecedented and unrepentant misery to Wrigley Field is his 4 1/2 years as owner, and I have been critical of almost everything he’s done – minus the mercy killing of Jim Hendry as general manager, which the right thing done a year too late.

Instead of calling out Ricketts for his robber-baron ownership, why not be proactive and share what should be done to make being a Cubs fan a little more joyful through my ownership – if I ever stumble into the $1.2 billion needed to buy the dumpster fire of a franchise.

12 – Mr. Ricketts, take down those garish signs  Wrigley Field is beautiful just as it is, so removing the offensive festoonage on the facade of the ballpark that taints the experience of driving to east on Addison to see Wrigley emerge from the trees that line the north side of the street.  This is Wrigley Field not a damn casino/whorehouse.

11 – Boom! Boom! Out go the lights  Night baseball works in some places, but not at Wrigley Field.  Every game being over at 4p gives kids plenty of time to get home to get a good night sleep, every drunk a chance to bounce around the 553 bars within a mile of the ballpark for additional day drinking, and Cubs employees a somewhat normal family life.

10 – Adios Crane Kenney  The president of business operations who crafted the insane deal with the rooftops and has seen the wisdom in opening Wrigley Field for movie showings like some drive-in theater must go.  I’m not buying the Cubs to squeeze every dollar out of Wrigley Field, and that rooftop deal alone is enough to forever cast Kenney into the Wharton School of Business fires of eternal damnation.

9 – Troughs for All  Not all progress is good progress, and the aluminum troughs in favor of urinals is crowd control genius that should be expanded for women, not contracted for men.  The complaint I hear most from women at Wrigley is that the lines at the bathroom are too long.  We will take care of that by introducing urination-only troughs for the ladies.  There are hygienic and janitorial concerns that must be addressed by the design team, but if we can put a man on the moon, we can certainly figure out a way for a woman to gain mess-and-humiliation-free used beer relief.

8 – Wrigley Field is for baseball and baseball only  Ricketts and Kenney certainly didn’t invent the concept of bringing hordes of folks into a ballpark for concerts, exhibitions, circuses, and odd sporting events like ski-jumping, but if I owned Wrigley Field, I would show a little respect by bringing fans in for only the 81 Cubs home games, and annual postseason appearances (because I would not take 4 1/2 years to get this thing straight).

7 – Theo, we hardly knew ye  Theo Epstein would be fired immediately in favor of John Mozeliak, who continues to restock the Cardinals farm system without purposely tanking.  The June draft after the Cardinals won the World Series in 2011, Mozeliak drafted Michael Wacha 19th.  He became an ace down the stretch and during the playoffs in 2013.  The Cubs drafted Albert Almora #6. He’s now in high-A ball.

#6 – 22,000 seats on sale the day of every game  When Phil Wrigley owned the team, scalpers were thwarted by the decision to hold 22,000 seats for sale on the day of every game.  Granted, some days from 1932-1977, the Cubs drew far less than 22,000, but I like the idea of people being able to head to the ballpark without tickets in hand to enjoy a day at the ballpark.  No question I would lose money on the deal – both in initial sales, and on secondary market capitalization, but if I buy the Cubs, it won’t be because I need extra scratch from scalping tickets.

#5 – Best players play NOW  The arbitration clock be damned.  I’m not stuffing potential all-stars who are close to ready for the majors on Iowa and West Tennessee rosters.  Javier Baez and Kris Bryant would be on the Cubs roster right now, and they would play everyday.  Potential excellence mixed with some growing pains beats the hell out of sustained mediocrity.  Luis Valbuena and Darwin Barney can tend bar at Will’s Northwoods Inn and watch their replacements on TV.

#4 – Rooftops closed  To hell with that deal signed in 2003 to compel the rooftop owners to give 17% of their gross to the team in exchange for leaving the sight lines intact.  I’m putting screens up to block the view, and those product thieves can sue if they like.  I would have billions, and could appeal any judgment until the grandchildren of the current owners lose interest.  I’m not putting up those wretched video boards, but I’ll be damned if I would tolerate theft of my product.  Once the knucklehead neighbors stopped selling tickets, the screens come down to restore the historic vista.

#3 – Au Revoir, Budweiser; Ya Hey, Krausened beer from LaCrosse, Wisconsin!  Budweiser is owned by a Belgian/Brazilian company, and it’s a St. Louis beer.  Everything from Missouri and has a taint to it, like Granny says in “Outlaw Josey Wales.”  If we are competing against the Cardinals, we sure as hell aren’t supporting the company that used to be owned by the family that used to own the Cardinals.

#2 – Spending on talent commences!  I’m not going screwy like former GM Jim Hendry, signing marginal and possibly insane players to multi-year huge dollar deals, but the days of Nate Schierholtz, Ryan Sweeney, and the aforemented Valbuena holding roster spots would be over on day one of my reign.  We build with the farm system and plug holes with free agents, like teams that win championships, and the Chicago Cubs sure as hell are NEVER going to be sellers at the trade deadline.  Our talent will remain our talent.  Period.  Champions don’t let winners walk out the door.

#1 – Lovable kid-friendly Clark the mascot undergoes change  Because my Dad’s name was Clark, I would redesign the mascot to resemble him circa 1985 – receding hairline, brown polyester pants, penguin shirt with pack of Luckies in the front pocket, reading glasses on his nose, and a hair-trigger temper, this Clark would bring a very different attitude to his job as mascot.  Children would be chased for spilling drinks, and ordered to “wipe the damn ketchup off your face!”.  This Clark would also complain about overpaid athletes, and amuse himself by mimicking Eleanor Roosevelt.

The only thing missing from this equation is the $1.2 billion it would take to buy the team, and another few hunge to run things smoothly without worrying about a million here or there.  And one more thing, we will never produce a pink anything – pink hat, pink jersey, pink coozie, pink wrist band, or pink collectable of any kind.