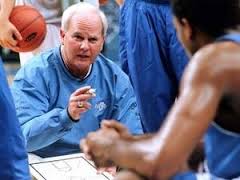 Royce Waltman was a good man and mentor to hundred of young men he shepherded through high school and college.

There is something special about a coach who dedicates a life to helping 18-year old kids become 22-year old men.  They leave a legacy more enduring than wealth or celebrity.  Like teachers, coaches have a long list of those whose lives they have touched to prove they were here.

When Royce Waltman peacefully declared victory in his fight against cancer, I hope he was able to reflect upon the many men who learned so many lessons from him under his tutelage as a high school coach in Bedford, Pennsylvania, an assistant at Indiana, head coach turns at DePauw, Indianapolis, and Indiana State, and finally as an assistant at Roncalli High School in Indianapolis.

“His knowledge of the game and ability to teach it was only eclipsed by the way he made you feel when you were with him,” said IU coach Tom Crean in a statement released by Indiana University.  “Personally, I respected him long before I came to Indiana.  In getting to know Royce here, I was incredibly fortunate to have become his friend.”

“The sign of this man’s toughness was on our trip to New York when we played Washington and UConn in the Wounded Warrior project,” Crean continued.  “We all knew he was in pain and he went great lengths to not show it and stayed focused on his radio duties.  It was another example of what made him a great leader, his poise under pressure and putting others before himself.  Not only are my thoughts and prayers with Coach Waltman’s family,  but with people like Brad Brownell, Rick Ray, Dick Bender and the countless others who lost a father figure.”

Indiana play-by-play legend Don Fischer remembered his colleague on the IU broadcasts as a friend, “Royce was one of these coaches that endeared himself to everybody, even those who he got angry with now and then.  Everybody that knew him respected him and liked him.  He was a terrific basketball coach but he was much more than that to everyone he knew.  The time we spent with him on our broadcasts were absolutely special.”

In Indianapolis, Waltman has been quoted many times by former player while he was at Indiana and current 1070 the Fan host Dan Dakich as saying, “Whatever you do, don’t get fired for losing.”

Waltman packed a lot of teaching into his 72 years, and he will be missed.