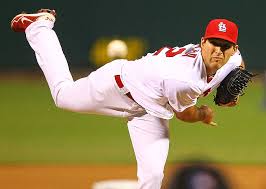 If Theo was really that smart, wouldn’t Michael Wacha be a Cub instead of Edwin Jackson?

The issue with the Chicago Cubs isn’t about improving over the next four years, but catching the St. Louis Cardinals who manage to win and build at the same time.

I’ve been writing about that for two years, and Mark Potash of the Chicago Sun-Times is climbing aboard the logic train that is starting to roll in Chicago.

In Theo’s first draft, the Cubs drafted outfielder Albert Almora with the sixth overall pick.  Almora, who will turn 20 tomorrow, is hitting .279 in high-A ball, and is projected to hit the majors in either 2016 or 2017.  The Cardinals drafted Michael Wacha 13 selections later, and he was the best pitcher in the 2013 postseason as he put the Cardinals on his back to carry them into the World Series.

The reason teams passed on Wacha was reportedly the lack of a third pitch.  Now he has one that the Cubs are going to likely face four times a year for the next decade and a half..

Potash also correctly holds the Cubs accountable for the signing of Edwin Jackson, a 30-year old career underachiever now toiling for his eighth team.  The year prior to the Cubs signing him, the Nationals awarded Jackson’s two months of relative success with the Cardinals with a one-year, $11-million deal.  Jackson was 10-11 for a 98-64 team.

The Cubs were then compelled through a process they should abandon to give him an inexplicably generous four-year, $52 million deal.  Predictably, he won at a percentage lower than the team he played for.  Meanwhile, Wacha, well, you know.

Kris Bryant, Javier Baez, Almora, C.J. Edwards, Jorge Soler, and other prospects are filling the Cubs farm system with quality talent, but can the Cubs figure out how to prepare them to win at the major league level?  No one knows.  Fans can hope or doubt, depending upon their perspective.  What Cubs fans should know is that the Cardinals are really good at preparing young talent to succeed.

Last season, the Cardinals had 15 players on their postseason roster earning less than $1 million per year, and they nearly won the World Series for the second time in three years.  That shows development in the Cardinals farm system that nurtures and produces winners.

The Cubs first trick will be an easy one – to improve over the status quo.  Bringing up better talent than Luis Valbuena, Nate Schierholtz, and Ryan Sweeney should be a simple process.  The tougher part of the equation is putting a product on the field that will win more than Cardinals.  That is heavy lifting, and Chicagoans are beginning to understand it because smart guys like Potash are finally starting to ask the right questions.