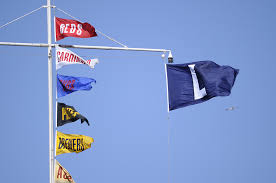 The “L” flag above the iconic Wrigley Field scoreboard will fly more often than not for several more years.

On Sunday, April 29, 1962, the San Francisco Giants shutout the Chicago Cubs 7-0 and 6-0 in a doubleheader at Candlestick Park.  Glen Hobbie and Jack Curtis were the losing pitchers that day, and the offense generated three hits in each game.  Future Hall of Famers Ernie Banks and Billy Williams each a hit in each game.

That sweep left the Cubs in last place in the National League with a 4-14 record to an all-time worst 59-103 record (tied with the 1966 team).  Incredibly, that doubleheader represented the third time in that miserable April the Cubs were swept in consecutive games.

Yesterday was the first time the Cubs were shutout twice for the first time since those dark days 52 years ago.  The Yankees did the deed in beating the Cubs 3-0 and 2-0.  In Game One, the Cubs managed an eerily familiar three hits – bunt singles by Junior Lake and Anthony Rizzo, and another single by Rizzo in the ninth.

The sweep left the Cubs with four wins, in last place, and having suffered four shutouts in 14 games.  They have another 13 games to amass the two additional goose eggs to equal futility the futility of the 1962 team.

Somewhere in heaven Elvin Tappe is laughing (he was relieved as head coach of the 1962 Cubs two games after the sweep as the Cubs record hit 4-16, and before you think I’m nuts for referring to him as a head coach, the Cubs employed a college of coaches during that season rather than a manager), and in Kansas City, former manager Dale Sveum is smiling too while feeling great empathy for current manager Rick Renteria.

Poor Rick Renteria, so happy that he finally got his chance to lead a major league team only to figure out so quickly that he is destined to fail just as Sveum was because the Cubs roster is filled top to bottom with relentless mediocrity.

Shouting that the Cubs suck seems a waste of effort.  Of course they do, but it’s not just because the Cubs are the Cubs, as many not-so-cleverly surmise.  The Cubs are bad because a decision has been made that it’s best if they suck until the financial constraints imposed by the terms of sale come off after the 2019 season.

So because 81-81 doesn’t do anyone any good, team president Theo Epstein and GM Jed Hoyer will continue to cobble together substandard parts in an effort to stockpile as much young talent as possible.  They will draft fourth in the 2014 June Draft, and will have a tough time wriggling out of another top three slot in 2015.  That would take wins, and the Cubs are not going to win much this season especially after selling off all coveted talent before the trade deadline.

If the Cubs are brutal now, imagine the starting rotation without Jeff Samarzdija and Jason Hammel.  On the positive side of the ledger, it’s possible Darwin Barney and his .120 batting average will be dealt.

That doesn’t keep the Cubs from charging a king’s ransom to watch this wayward outfit play at a historic level of terrible, or for the duplicitous owner to proclaim during spring training the team looks playoff contention worthy.  For those who argue, “What the hell is the owner supposed to say during spring training?”, I argue he should have said, “This team is built to fight hard every game, and we will enjoy every win.”  That level of pablum is insulting, but it beats a bald-faced lie.

While fans await the arrival of Kris Bryant, Javier Baez, Albert Almora, and Jorge Soler – among others – they are treated to a trip to a valley of wretchedness that lets fans know that baseball is a pretty damn difficult game to be good at.

It must be if the Cubs can be on a pace to suffer more than 40 shutouts when the team record is only 22.