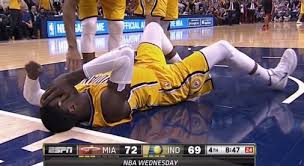 Was it a foul by LeBron James that cause the dizzying downward spiral Roy Hibbert is enduring?

The sad thing about peeling back the layers of an onion is that eventually you run out of layers, and as embattled Indiana Pacers center Roy Hibbert sat on the bench scratching his head during last night’s loss to the Washington Wizards it was apparent that the only answer that makes any sense for his recent struggles is that Hibbert is who and what he is.

That’s not good news for the Pacers, who are built to function best when Hibbert is playing at the level that made him an all-star just three months ago.

A report on pacers.com revealed a postgame meeting between Hibbert and teammates David West and Rasual Butler that was likely some form of intervention – a peer led defibrillation to Hibbert’s psyche meant to both challenge and support him.

How Hibbert responds is anyone’s guess – as it has always been.  It’s a lonely life being 7’2″.  The peer group is limited for a guy whose height served as a virtual sentence that he play college and professional basketball.  The rewards are plenty, including the $14+ million Hibbert earns for enduring a minimum of 100 games each year on knees, hips, and ankles not built for such a pounding.

None of that should make us feel sorry for Hibbert.  By our standards, he should be having a hell of a good time.  Despite the nonstop work required to build his body and game, playing basketball should be a fun way to make the type of living reserved for business owners.

Some guys aren’t built to be the focus.  When eyes are on them, they are repulsed by judgment – both positive and negative.  Doubt creeps in.  The fun is replaced by misery.  With every concerned friend, teammate, and coach who tries to push a button, suspicion they will be unable to answer the challenges mounts.

Whether Hibbert is that kind of guy, I don’t know.  It’s likely only Hibbert knows.  The only evidence I see of a mostly introverted man is the complete absence of eye contact that exists when he talks to the media.  While Hibbert is accessible most of the time and his comments usually reasonable efforts to communicate a relevant thought, his behavior suggests a complete lack of comfort in that environment.

When times are good, Hibbert can be gregarious, but when they go south he turns surly and churlish.

The continued psychological poking and prodding don’t seem to be helpful for Hibbert, and those who are not plagued by relentless self-doubt have a total disdain for a guy who can’t find the keys to unlock total aggression and readiness for battle.  They refer to a guy like Hibbert as weak, but no one wants to find his way out of this funk worse than Hibbert does.

That is all assuming that Hibbert is one of those guys, and that the problem is not physical.  After the win against Miami on March 26th – the game when Hibbert was fouled hard by LeBron James and hit his head – Hibbert has been a different player.  Through that game, Hibbert averaged 11.4 points per game shooting 45.9 from the field and grabbing 7.0 rebounds.  During the remainder of the regular season, Hibbert averaged 6.8 ppg making only 27.2% of his shots and netting 3.7 boards.  In the playoffs, the averages are 4.6 ppg, 35.5%, and 3.3 rpg.

Click here to treat your teeth to the best care possible from Dr. Mike O’Neil at Today’s Dentistry

There are plenty of reasons that Hibbert may have seen his productivity fall after March 26th, and while those close to him push buttons trying to reanimate the player he built himself into, the answer must come from within Hibbert.

Or his head was scrambled when he fell on it against the Heat.  Who knows?

The only thing fans, teammates, and coaches can be sure of is that if the cure is time, that is one luxury the Pacers do not have.