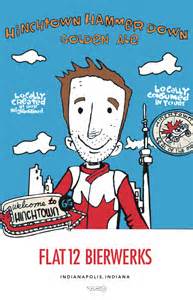 The Month of  May is off to unique start this year with the first weekend of activities at the Indianapolis Motor Speedway being occupied by the inaugural Grand Prix of Indianapolis. But while the sight of Indy cars going around the road course instead of the oval is different for fans, the faces and personalities piloting the Verizon IndyCar Series race cars are the same.

I caught up with one of the fan favorites (and media favorites, for that matter), Andretti Autosport’s James Hinchcliffe, to get his take on the new race and branching out with his Hinchtown brew.

On starting the month with the Grand Prix: “It’s great. I think it’s the start of something exciting and new and hopefully something we do for a long time. It’s a great track they’ve built here – a huge credit to IMS for getting it done. The weather wasn’t very cooperative in the spring leading up to it, so it’s nice that it’s ready for us to race on. It’s a fun course for us to drive; super challenging for the engineers. I think it’s going to be a hell of a race.”

What is the most challenging part of this course? The variances – tight corners, long straightaways?: “Essentially, yeah, because it throws up a lot of options downforce-wise. We’re kind of calling it ‘trim wars’ right now, trying to figure out what the right level of downforce to run is. You’re trying to do a lot of testing in a pretty short period of time in the grand scheme of things, even with the test we had here last week. Normally we have a decade’s worth of data at any given track to try to lean back on and pull from. Right now, we’re trying to do it on a couple sessions only. It’s a lot of hard work, but I think we’ll get there.”

Away from the racetrack, you are into year three of having a beer named after you. Talk about the Hinchtown Hammer Down Golden Ale and your involvement with Flat 12 Bierwerks: “It’s pretty much every Canadian’s dream having a beer named after them. It’s been a lot of fun, the Flat 12 guys have been great to work with. What started as kind of a joke in 2012 has now grown into full-blown production here. It’s on the tap full-time at the brewery and it’s in cans and bottles now, so you can bring them into the speedway for the Month of May, which is something we’re excited about. Who doesn’t like drinking a nice cold beer on a hot day, and we have a couple of those in the Month of May”