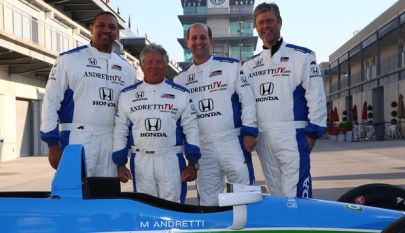 Sunday  was one of those perfect sports days in Indianapolis. The city was front and center on ABC for the better part of six hours – first for Indy 500 qualifying and then the much anticipated Game 1 Eastern Conference Finals match-up between the Indiana Pacers and Miami Heat.

All the while, Mother Nature delivered the Chamber of Commerce-type of weather that made the day outside and the shots on TV about as perfect as you could ask for.

My day started by spending some time on the crystal clear morning morning at the Indianapolis Motor Speedway with  NBA on ESPN on ABC color analysts Jeff Van Gundy and Mark Jackson, senior coordinating producer Tim Corrigan, and others. The Indianapolis Motor Speedway and Speedway president Doug Boles rolled out the red carpet for the gang. And, as usual, racing legend Mario Andretti and the Indy Racing Experience delivered the ride of a lifetime in the IndyCar two-seater.

My day ended, driving home from the Speedway with the windows rolled down listening to the magic of Mark Boyle and Bobby “Slick” Leonard paint the perfect Game 1 picture on the radio: “Over to George for three……BOOM BABY! He got ’em out of the left corner….”

Out of one of the commercial breaks, studio analyst Kevin Lee was talking to Boyle about the two-seater experience Jackson and Van Gundy had that morning.  Lee asked Boyle if he would take the ride if it could be arranged. He said he would. “Slick” was then asked if he would do it. He replied, “Hell, I want to drive the thing!”

To top it off, I  turned the channel to WGN Radio 720 AM to get a Game 1 update on the Chicago Blackhawks-Los Angeles Kings just in time to hear the call of Jonathan Toews’ game-clinching goal for the ‘Hawks and the sound of “Chelsea Dagger” and a chorus of fans booming in the background. Da-da da, da-da da, da-da-da-da-da-da da…

Yep, a prefect ending and drive home on a great day.

If column inches were a barrier, I would weave condensed comments from the morning experience into this piece. But column inches aren’t a barrier, so I’ll make good use of the thorough IMS Daily Trackside Report and share the full experience with you: 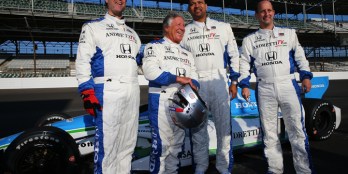 JEFF VAN GUNDY: “That was the greatest experience of my life. When you watch it on TV and you see it from afar, you have no idea of how fast it is. I just can’t believe they can be so close to each other and make split second decisions, I don’t know how they do it. I was scared at first. I have never been that fast in my life other than in an airplane. When you hit the bank and the turn, how it’s pulling on you, it’s incredible. There is nothing that you could ever do that would approximate that. That cannot be re-done.”

On his family history with the Indianapolis 500: “My grandfather was an usher here, a yellow shirt. This was a highlight for him every year. And my Mom would come to qualifying and the race. They lived a mile from here. So I called her this morning to say I was going to do this. I said. ‘Who is your favorite driver?’ She said, ‘Mario Andretti.’ It’s emotional, you know what I mean? I’ve never been here before, as many times as I’ve been in Indianapolis. Man, you talk about checking something off your list, this is special.”

On growing up listening to the ‘500’ on the radio: When I was in high school, I remember specifically, I was in upstate New York. The TV would be on but we would listen to it on the radio. She (his Mom) would have it on all day. I never understood it. I’m like, ‘You’re listening to the radio?’ And that’s what she did for a lot of her life.”

On how this experience with Mario Andretti translated to anything basketball-related: “You know what, I was just with Michael Jordan doing his thing. That would be number one. He won F1, Daytona and here. Are you kidding me? And then, to do it on the most historic track and to have the chance to actually be in the back seat and ride; one of the great thrills of my life.”

MARK JACKSON: “I just drove with Mario Andretti. It was absolutely unbelievable. It was a thrill of a lifetime. There is nothing like this. The unbelievable thing is I am upset at myself because, playing here and living here, never experiencing it during those times. It really is a blessing to do this today. I’m just speechless right now.”

TIM CORRIGAN: “I don’t even know what to compare it to. All I can tell you is when we started hitting those turns and I looked over and we were that close to the wall, it was spectacular. I completely respect everything any professional athlete does on any level, and it’s just mind blowing to think that 33 drivers are out there at the same time doing that. I came to the Speedway in 1986 when I was trying to get into the TV business to work as a runner for ABC. That’s the only time I’ve ever been here before today.”

MARIO ANDRETTI: “I think they loved it. They didn’t know what to expect. But, it is usually more of a thrill than they ever anticipated, in my opinion. At least that is how they are expressing it. That is a reaction we pretty much get from everyone. It’s satisfying from my standpoint because I know that I am bringing fans closer and closer. I love doing this. I think I enjoy it more than they do. I think this is a fantastic program for the IndyCar series and for motor racing because it is such a non-participant sport. This is the only way really to get fans to appreciate what is going on. To me, it’s one of the most important programs in motorsports right now.”