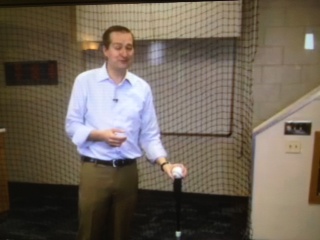 Tom Ricketts whining about the facility he forces his Cubs to use when they warm up to pinch hit in the video the team released yesterday.

Any credibility that Chicago Cubs owner had vanished last year when he claimed that he would consider moving the team to a suburban stadium if his Wrigley Field renovation plan was not approved by the city.

When he claimed during spring training that the Cubs looked like a team that could go to the playoffs, people rightly laughed.

In a video released yesterday on Cubs.com, Ricketts croaked that the Cubs have the least player-friendly facility in the major leagues.  Part of the video was shot as Ricketts showed the ridiculous batting tee area in the clubhouse as though he isn’t responsible for it.

Ricketts scoffs at the covering over a TV that needs to be deployed along with the net for hitters to be able take a few pre-at bat cuts.  Here’s an idea for Ricketts – build a damn batting cage!  The only hold up in this $500-million modernization is the series of video boards and signs that will violate the contract with the rooftop owners that prohibits any change in the view from those rooftops.  There isn’t a word in the rooftop contract barring a batting cage.

In the same contract, the Cubs are guaranteed 17% of the gross take of the rooftop owners.  That total was estimated at $3.1 million for the 2013 season.  Ricketts acts like the rooftop owners are the bad guys in their stalemate, but the deal was negotiated at least in part by current Cubs president of business ops Crane Kenney and it runs until 2023.

The strange part of the video by the almost despondent Ricketts is that there is nothing preventing him from making all of the renovations to Wrigley Field that require no change to the view from the rooftops.

If he’s embarrassed by the condition of the clubhouse, he should change it because waiting for the rooftop owners to shred a legally contract out of the goodness of their hearts to allow revenue generating/view blocking signage is a waste of time.  This morning, Ryan McLaughlin of the Wrigleyville Rooftops Association released a statement, “The Ricketts family’s decision to unilaterally end negotiations with their contractual partners is another refusal to accept any of the proposed win-win solutions that could have funded the modernization of Wrigley Field and enhance the team’s competitiveness.

“In fact, it appears their zeal to block rooftop owners who pay them millions of dollars a year in royalties knows no bounds,” McLaughlin continued.  “Unfortunately, this decision by the Ricketts family will now result in this matter being resolved in a court of law.”

The renovation has pieces that are interconnected, and building a new clubhouse isn’t as simple on the Wrigley Field footprint with a water table not far below the ground level.  It’s not like building a bigger deck in the backyard, but it isn’t impossible, and if Ricketts is embarrassed to the point of mocking his own facility, the solution is in the Ricketts Family Trust checkbook.

Teeth a little dingy or hurt – Click here to get them fixed by the best – Dr. Mike O’Neil at Today’s Dentistry

Two things continue to pop into my mind regarding Ricketts and the Cubs.  First, the fortunes of the team are not going to change until the new TV deal starts pumping in fresh cash and when the restrictive covenants of the sale of the team (way too complicated to explain here) expire.  Both happen after the 2019 season (the WGN deal is done after 2014, but the CSN deal runs through 2019).

The second issue is that Ricketts is a smart guy and knows that the rooftop owners will sue to preserve their livelihood.  Rooftop expenses were allocated with 2023 in mind as the earliest closure of their window of operation, and running that forward nine years will be expensive – clearly too tall an order for the owner of a team who forces his players to cover a TV in order to take some hacks.

Ricketts’ video appears to be a dare to the rooftops to litigate, and why would that happen?  The Cubs are trimming payroll – right now it’s $89 million with $14 million being paid to New York Yankee Alfonso Soriano.  There appears to be no floor to the level of play fans will pay an average of $47 to watch, so as long as excuses can be perpetuated and villains created, why change the business model until 2020 when all financial restrictions come off.

This is exactly the kind of dopey play I would expect from a smartest guy in the room wonk like Ricketts.  Instead of continuing to court the legally protected rooftop owners as partners, the Cubs will force them to sue, demonize them, and buy a few more years of expectation free profit.

Not sure if Ricketts studied Nixon, but he sure strategizes like him.