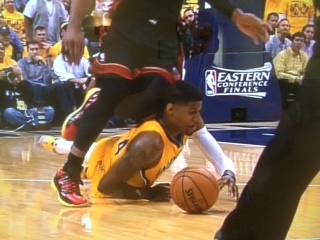 How is the possibility that this knee to Paul George’s head was purposeful so difficult to fathom?

The Dan Dakich Show doesn’t dole out a bunch of pre-approved media claptrap from 12p-3p on 1070 the Fan in Indianapolis.  No one else is talking about whether the Miami Heat’s Dwyane Wade knee to the back of Pacers forward Paul George’s skull was inadvertent or intentional.  Dan is, and he’s right to.

Too many laymen watch elite athletes through their own experiences and feel the very probable is impossible.  A knee to the brain as a man dives across another moving athlete is almost impossible for weekend warriors to imagine executing, but to a player like Wade it’s as easy as making a layup.

At least it looked like both players were diving at the time, but a closer look (see pic above) shows that Wade dove following the impact.  He was in full control of both legs at the time of the kick.

Remember the LeBron James elbow that squeezed through Roy Hibbert’s arms during a regular season Pacers vs. Heat game in March is another great example of a physical act that showed otherworldly dexterity that 99.999% of regular guys don’t possess, and so James got a virtual pass.

Another quality that most normal people don’t have, or if they do they sure don’t utilize it in ordinary life, is a willingness to do whatever it takes to win.  And I mean whatever.

Athleticism and an all powerful craving for success are two of the chief differences between professionals and amateurs in sports and business, and as Dan spoke about his belief that Wade did what he did to George late in the game Tuesday night, I thought about those differences.  Dan has been there, willing to go to lengths most would shrink from to emerge victorious.

You want to know why Dan was able to stop Michael Jordan in Indiana’s 1984 NCAA Tournament win over North Carolina?  It’s the same reason Bob Knight assigned Dan to defend Jordan – because extreme will can overcome an athletic deficit.

With a chance to diminish an opponent without penalty, champions will always take their shot, and that is exactly what Wade did.

This isn’t a criticism of Wade anymore than Dan’s revelation about his act being purposeful was.  Wade had an opening to adjust the competitive balance in the Eastern Conference Finals, and he took it.

Just because the decision was made very, very quickly – almost instantaneously – Wade’s intent shouldn’t be dismissed, nor should his innocence be granted.

Now, there is no way Wade will ever publicly own up to his attempt to bring pain to George and weaken the Pacers ability to compete, but for anyone to infer blind luck as the reason his knee solidly struck the cranium of the Pacers best player is ridiculous – or he/she has never dug deep into the soul where the bad stuff lies.

For champions, winning is the equivalent of self-preservation.  How hard would you fight if losing equaled death?  That’s the regular state for men like Michael Jordan, Isiah Thomas, and Dwyane Wade.  The difference between dirty and clean is meaningless to them compared to the difference between winning and losing.

Click here to buy the best hot tub available in Indiana, and its Indiana made by Royal Spa!

One of the wonderful aspects of competing is experiencing first hand the speed with which physical decisions can be made and executed.  Time slows, a conscious decision can be made, and the perfect physical motion can be executed in the blink of an eye.  Whether it’s driving a 2-2 slide piece the other way for a game-winning oppo-taco or choosing to allow a knee to dangle in exactly the right spot to connect with an opposing player’s head, it’s all sports.

The Pacers know damn well that the knee to the head (if not the resulting injury) was intentional, and the Pacers would do exactly the same thing to Wade or James if given the opportunity in a moment where the referee’s judgment and chance for a proportionate consequence would be briefly suspended.

Anyone who thinks otherwise is naive.

(The Dan Dakich Show airs every weekday from 12p-3p ET on 1070 the Fan and streams on 1070thefan.com.  As a source for unique perspective, it is in a class by itself.)

41 thoughts on “1070 the Fan’s Dan Dakich says Dwyane Wade did it on purpose, and of course he’s right”