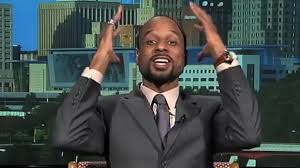 Bomani Jones is one of the best broadcasters in America, and his voice is being heard today.

So sad that a simple discussion on race can’t happen without people inferring acrimony between the participants.

Bomani Jones and Mark Cuban are both very smart guys coming at a very complicated and volatile issue from two unique perspectives, and the more smart people talk about race, the better all of us will understand the unique beliefs being advanced by blacks and whites.

Whites tend to assume that because they don’t encounter or perpetuate overt racism on a regular basis that racism no longer exists in a way that restricts blacks from achievement.  We see a black president, black CEOs, and blacks in media (like Jones) and infer that all of a sudden everyone got smart and the doors are open to everyone without exception.

The reality is obviously a little different, and the stereotypes persist as much as everyone wishes they didn’t.

Blacks hear whites prattle on and on about how equality has been achieved, and they think whites are insane and ignorant.

What Cuban and Jones tweeted toward each other isn’t nearly as important as the fact that things are being about race.  The more often racial differences are explored, the better we all understand each other.

Racism is a virulent curse upon our society regardless of the incremental progress that has been made since the emancipation of slaves 150 years ago.  Many blacks with slaves in their family history remain embittered, and a lot of whites want what they perceive to be whining about it to stop.

Smart people are still discussing the logic of reparations that ancestors of slaves deserve, and whites are eager to suggest that blacks get on with their lives because the last living slave owner died almost a century ago.

Consensus on reparations is unimaginable, but that shouldn’t stop the conversation.

My own experience is completely different from anything a black person has lived, but I’m still pissed off that my grandmother had to scrub the floors of rich people in Lake Forest, Illinois, to make ends meet.  She was never bitter about it, and used her experience to try to educate me about how to make it through the drudgery of repetitive and demeaning work without losing pride.

She was a very smart and proud woman, who lived an extraordinary life, raised three kids who have raised nine kids of their own.  All of us have had opportunities to succeed or have succeeded in large part because she scrubbed all those floors, but I’m still pissed off that she was forced to learn how how make it through each day with a scrub brush in her hand.

My outrage can’t measure to 1/10th of one-percent of the most eager-to-forget-the-past black man.  I have no idea what it is to walk in a black man’s shoes.  None.

And it’s not important that anyone become intimately aware of the challenges that each of us face in our lives.  A good solid first step would be to respect those with whom we come in contact, regardless of any stereotypical tagging they present.  Assume the good rather than the bad.

All of us don’t need to get along, but we should find a higher class of reasons to dislike one another.

The conversation via Twitter that all of us get to watch between Cuban and Bomani has prompted a significant amount of constructive dialogue, and out of it maybe we will become just a little bit less likely to judge based upon what we see as we walk past a kid on a sidewalk.

That makes today a good day.

2 thoughts on “Mark Cuban and Bomani Jones sparring on racial profiling, reparations, and dealing with prejudice”