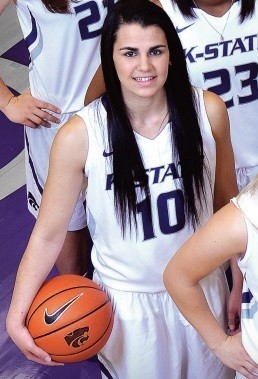 Leticia Romero wants to play basketball somewhere else. What could be wrong with that?  Given what we know right now – not a damn thing.

Could anybody be this dumb?  That’s what I kept thinking as I read reports from a variety of sources about freshman basketball player Leticia Romero and her so far unsuccessful attempts to transfer from Kansas State University.

There must be more to the story because reasonable people don’t behave like the athletic director at K-State without justification and an application of reason.

At a time when smart and powerful people are weighing the pros and cons of what modern NCAA inventor Walter Byers referred to as the “neo-plantation mentality” of college athletics, the last thing critics need is a lonely girl from the Canary Islands being selfishly denied the ability to transfer from a Big 12 school.

Playing collegiate sports is an honor to be respected and enjoyed, and that respect should be a two-way street between the athlete and university.  At the majority of universities that is exactly what happens.  Talented kids show up the summer before their freshman year, and leave four or five years later armed with a diploma and lessons that will benefit them for a lifetime.

It’s a shame that one of those lessons for Romero is that people with power can sometimes be jerks just because it suits them.

Here a brief synopsis of this troubling story.  Romero was the best player as a freshman on an 11-19 Kansas State team, earning Big 12 freshman of the week four times.  She led the Wildcats by scoring 14.2 points, grabbing 5.8 rebounds, dishing 5.0 assists, and snaring 1.9 steals per game.

Because of entrenched mediocrity at K-State, coach Deb Patterson was canned, and former TCU head coach Jeff Mittie was hired.  A long way from home and without the coach who recruited her, Romero decided to transfer.  According to reports, the request was initially declined, and then the school asked for the list of schools she was considering as her destination before they reconsidered.

According to ESPN, Romero provided a list of 100 acceptable schools.  A Kansas City Star report cites 94 as the number.  Regardless, all were declined as acceptable ports in her storm by K-State bigwigs.

Some who tried to apply logic to the denial assumed that Romero might have been awaiting word as to where Patterson would land.  When Northern Colorado hired Patterson as an assistant to head coach Kamie Etheridge (herself a former assistant of Patterson’s), a quick check of the list showed they weren’t on it.  The rest of the K-State staff displaced by Patterson’s firing followed her to Northern Colorado, so any thoughts that one of her former leaders tampered were assumed to be unfounded.

Still, Kansas State would only allow a transfer to schools Romero had never heard of.

This is exactly the kind of nonsense that critics of college athletics point to when demanding reform.  Heavy-handed doofuses sit in their ivory tower without any meaningful oversight treating their athletes like prize cattle rather than human beings is at the heart of complaints about a system that works very well 98% of the time.

But the moments of addle-brained abuse are too many even if Romero is the only victim of absolute power in collegiate athletics corrupting absolutely.

As for the K-State side of the story, the only public comment has been from athletic director John Currie via Twitter, “Generally speaking, on RARE occasions that we have denied a student-athlete transfer release, it has been because of concerns about outside tampering, undue influence by third parties, or procedures not being followed in an honest and forthright manner.”

When asked to enter a forum where questions might be asked and his answers scrutinized, Currie claims to be bound by concerns about privacy for Romero.  But on Twitter, he takes a shot at Romero himself.  All class.

It’s not fair to judge the 98% of the athletic departments who do their jobs with laser focus on the education and development of the student-athletes based upon the mopes like Currie.   Punishing athletes who dare show an independent will just because you can is weak, and Currie’s decision to do so has basked college sports in a terrible light – again.

If there is a missing chapter to this story that justifies the apparently unwarranted and punitive action against Romero, I would love to hear it.