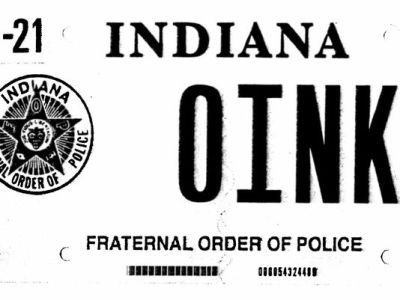 What kind of thin-skinned nitwit ruled this vanity plate unworthy?

Those who are offended by language baffle me.  Over the years, the skin of our society has become thinner rather than thicker, and that worries me.

The number of times my Dad barked something like, “Who gives a damn what (insert name here) had to say!”  Getting under his skin took more than profanity or an insult.  That was (and is) true for those of his generation.  When you live through a world war, a guy with a penchant for vulgarity is a petty concern.

Indiana’s Bureau of Motor Vehicles is positioning itself as the arbiter of good taste in the Hoosier State after a judge ruled that a policeman can use “OINK” as his vanity plate a year after the BMV denied his renewal.

“He (She or They) can’t do that!” seems to be something more and more of us yell throughout the course of our day.  Not only are we easily offended, there is a demand for immediate redress that is as bizarre as it is troubling.

Why do we care one way or another whether people swear in our presence or on our televisions and radios?  Do we really suffer any harm because of the invectives and obscenity.  Being completely callous to others and their anger or indifference to societal mores isn’t the point, but being in charge of our own emotions would be a minimum reasonable standard for attitude.

Unless we enjoy being upset, there is no point in listening to those who irritate us, and if we see a license plate with a word that bothers us, do we really need to have the state protect us from it?  Are we that weak?

“OINK” makes a banned list for license plates?  Who could possibly be offended by “OINK”?  If a policeman takes umbrage, a storm of citations when the car exceeds the speed limit would be a real world disincentive.  The obese would have to do some cognitive gymnastics to feel personally slighted.

Maybe the Geico pig would be disillusioned – if he weren’t fictitious.

Can we get over ourselves just a little bit?