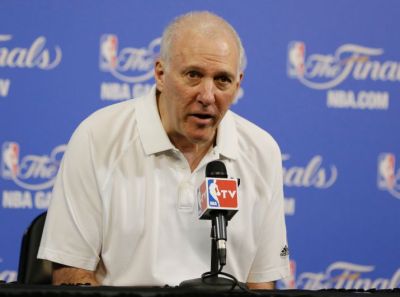 Gregg Popovich may be the most effective coach in all of professional sports, and last night’s Game Three was a master class in basketball.

The San Antonio Spurs played as close to perfect basketball on the road against a great team during the first 16 minutes of Game Three of the NBA Finals last night as I have ever seen.

Watching NBA games can be fun, tedious, miserable, or a joy depending upon who is playing, regardless of rooting interest.  While I don’t like the way the Miami Heat were assembled or their entitled attitude, that dislike isn’t enough to make me a fan of whomever they play.

This year’s NBA Finals is not like the old saying, “My two favorite teams are the Pacers and whoever is playing Miami.”  If the Heat win their third consecutive championship or the Spurs win their fifth overall is of little interest to me, but I love watching quick and efficient offense, and that makes the Spurs exploits must see TV.

Tony Parker, Danny Green, Kawhi Leonard, Tim Duncan, and company move the ball with such speed and precision that every possession can be an absolute clinic of how offensive basketball is – or should be – played.

If a team isn’t capable of extending their defense and pressuring the ball while taking away passing lanes, the Spurs are surgical in their attack.  Last night, the Heat came out passionless, and the Spurs went to work making an incredible 19 of their first 21 shots.

The first 16 minutes of last night’s Game Three was an absolute joy to watch – a magnificent offensive clinic that allowed the Spurs to build an insurmountable 25-lead over the two-time defending NBA champs.

One of the drills coaches use to encourage sharing the ball is to run no dribble scrimmages.  Spurs coach Gregg Popovich ran one for the better part of the first half in a pivotal game with the Larry O’Brien Trophy on the line.

While many NBA players and fans believe breaking down a defense is best done one-on-one off the dribble, Popovich and the Spurs prove every night that a passed ball moves faster and causes bigger problems for a defense than a dribbled ball.

Kawhi Leonard, the Pacer who wasn’t, dropped a career high 16 points in the first quarter and 29 for the game on just 13 field goal attempts.  He is the latest in a long line of functional players who will never be stars for the Spurs, but is likely to collect multiple championship rings.

In a league built on stars who sell jerseys both domestically and internationally, the Spurs just play the right way and win.  Popovich is the exception rather than the rule in that he teaches the game of basketball as a cultural selfless devotion to the team.

The Spurs have talent, but the reason for their success is the culture enforced by a coach who will not tolerate selfishness in a league that relentlessly displays it.  Why Popovich is virtually alone in teaching the game as a five-man dance of rhythm and movement resulting in endless open looks is a great question.

Scoring the basketball is not some mysterious and indecipherable riddle that requires a room full of geniuses.  Set solid screens, change speed and direction in cuts, make passes on time and on target, and hit open shots.  It’s more about details and precision than tactics.

There is a story John Madden tells about Vince Lombardi teaching the power sweep at a coaches clinic.  Lombarbi spent eight hours talking about that one play.  I get the feeling that Popovich will be discussed in the same reverential tones 20 years from now.

Popovich is not a media friendly guy whose charisma puts him on magazine covers, but he wins at an alarmingly routine rate.  In 17 full seasons in San Antonio, his Spurs teams have won 50 or more regular season games 16 times, and in the season he didn’t, they were 37-13.  That was the lockout shortened 1998-1999 year that ended with the Spurs first world championship.

In those 17 seasons, the Spurs have never failed to win 61% of their games.

And last night, the reason for all that success was obvious.  The Spurs give over their selfish desires for the collective good, and that starts and ends with a coach who successfully instills a team-first culture better than anyone else in sports.

Spurs jerseys gather dust on clearance racks, and they almost never make any network’s daily top ten highlights, but they keep showing anyone who pays attention how basketball is supposed to be played.

Up 2-1, the Spurs are in the driver’s seat for their fifth NBA Championship, and fans get at least another two chances to watch basketball played as close to perfectly as will likely happen again in our lifetimes.