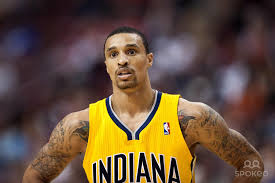 We all need different things to motivate us, and some hear only the cheers and others focus on the boos.  Whatever gets you up in the morning working hard is fine by me.

Indiana Pacers guard George Hill tweeted this morning about how more people want him to fail than succeed.

“FOR EVERY PERSON CHEERING FOR YOU ITS 5 WANTING/ WAITING FOR YOU TO FAIL!!!!! DONT BELIEVE THE HYPE!! #PROVETHEMWRONG #REALFANSVSFAKEFANS”

Of course, that’s a silly notion that invests way too much energy in the opinions and judgment of others, but if it helps fuel Hill’s fire, who are we to question it.  His decision to share that philosophy via social media is a little strange, and only serves to fuel the fire of the boobs who just as misguidedly expend so much energy either praising or deriding a man who earns $8-million per year for his basketball skills.

The whole worship/loathe dynamic with sports stars is an odd development in the human psyche, but whatever puts asses in the seats should be fine by the teams and their employees.

It’s asinine and counterproductive for middle class folks to boo people for playing a sport poorly, but I’ve done it a bunch myself.  Maybe it’s a release that people need so their heads don’t explode at work or with family.

Head to the stadium or arena, and vent all over the rich and unthankful.  I guess when viewed through that prism, it’s a natural piece of behavior.  But if Hill or other players are listening to talk radio or checking their Twitter feeds to take the temperature of the jabbering masses, they should do more fishing, online shopping, and traveling.

As for the fans, it would be great if all of our lives were free enough of frustration to keep our attention focused on what’s really important, but that would mean empty arenas and stadia.

The cheers and boos are a small price to pay for extreme wealth for a short period of time.  My advice to Hill and the fans is the same – do a better job of focusing on what’s important.