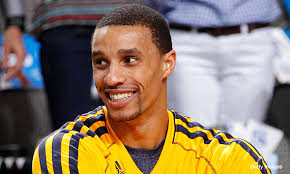 Sure, George Hill was honest and maybe a little callous in his tweet, but can’t we handle that without getting pissed off at him?

If Indiana Pacers guard George Hill can’t post a small motivational tweet without angering radio hosts and their callers, our society is in big trouble.

Hill’s message was simple – that for every true fan, there are five waiting for him to fail.  That’s a bleak assessment that reflects the level at which Hill pays attention to knuckleheads, but the judgment the tweet has prompted is proportionally outrageous.

I guess it was a slow day for eager to be agitated fans.

Athletes are under no obligation to please us with each and every utterance, and holding them to that standard is both unfair and asinine.  What fans and media are asking is that the level of communication from celebrities to fans be restricted to pablumatic blather about charities and innocuous chit-chat.  We deserve better from them, and they deserve much more latitude from us.

It’s as though anything even mildly polarizing is seen as an attack on our sensibilities, and that show a thin-skinnedness that borders on madness.

Lance Stephenson blew in LeBron James ear, and the world crapped its collective pants.  Roy Hibbert called out a teammate for being selfish, and a public hissy-fit followed.

Is our threshold for a little fun and honesty so low that we need athletes to be politicians who only tell convenient and uninteresting truths?

Our lives have to be interesting enough that Hill’s musings pale in comparisons as topics of conversation and drivers of outrage.

It used to be true that people with odd opinions about things or a self-important attitude were simply dismissed as ridiculous, but today the media and fans intercede as though minor violations of our sensibilities require an apology and donation to charity.

Of course, Hill’s blurting, Hibbert’s blaming, and Stephenson’s blowing reflect unwise decisions, but who among us aren’t guilty of that every single day, if not hour, of our lives.  But if learning from those lessons causes us to evolve into inoffensive clones who are relentlessly tedious and dull, then shame on us for making the world more boring.

In 100 years, we are all going to be dead and if our chief contribution to society is to neuter it from all thoughts and utterances that are bothersome, shame on us.

Good for those who still have the stones to rage against the machine, call out the insipid, and say things we have been advised not to.  Soon enough, our voices and twitter feeds will turn silent as we succumb to whatever finally dooms us.  Living life trying to avoid discourse and disagreement is the weakest of all options, and discouraging those who say and write what pisses you off is just as unbold.

Click here to fix your teeth. The best dentist in Indiana has a few openings! Dr. Mike O’Neil and Today’s Dentistry want to help you!

Give Hill a pat on the back for having the stones to reveal the motivation for his hard work, Hibbert for giving us a look inside the Pacers locker room, and Stephenson for bringing some fun to a way-too-serious game of throwing a ball through an orange hoop.

Basketball is supposed to be fun, and life is too.  People yelling about Hill’s tweet made it less fun yesterday.

Get over yourselves, and say something a little outrageous yourself today.

When my show starts on CBS Sports 1430 AM on June 23rd (Monday thru Friday from 3p-6p), that is going to be the mission.  Say and do things that I believe regardless of public sentiment, encourage others to join, and enjoy the hell out of it.

That’s the way life should be lived, and definitely what radio should be about.  Glad that Hill and many of the rest of the Pacers agree.

One thought on “Athlete and celebrity tweets outrage Indiana Pacers fans – Are we really this thin-skinned?”