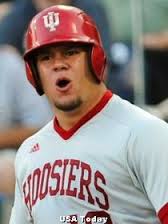 Kyle Schwarber spent less time in Boise than many summer vacationers. His era with the Hawks lasted less than one week.

Maybe the fourth overall pick in Major League Baseball’s First Year Player Draft didn’t much care for Boise, Idaho, and tried to hit his way back to the midwest as quickly as possible.  Maybe the Cubs farmhand – one week into his professional career – gets antsy staying in one place for more than a few days.  Or maybe Kyle Schwarber can just flat-out rake.

Whatever the reason, Schwarber’s stay with the low-A Boise Hawks wasn’t long enough to force him to unpack because he piled up 12 hits in 20 at-bats with four home runs and 10 RBIs.  So now he takes his belongings to Kane County to play for the Cougars, hoping to bounce just as quickly to High-A Daytona.

The Cubs latest minor league offensive menace who would still be playing in the College World Series if the Hoosiers could have held onto a ninth inning lead against the Stanford Cardinal and then won the Super Regoinal, Schwarber was projected as the most advanced hitter in the draft.  Nothing has happened so far to disprove that assessment.

It would be silly to expect Schwarber to continue to hit at a .600 level, but just as silly to keep him in Boise any longer than the week he spent there.  Promote to struggle, and then allow the adversity to guide improvement is a good developmental strategy the Cubs are less than enthusiastic about with 2013 first round pick Kris Bryant as he has destroyed Double-A pitching so far this season to the tune of a .355 average with 22 home runs and 59 RBIs, but while he is like ready for the Cubs, they are not ready for him.

Starting Bryant’s major league clock before they have to would be a terrible business decision, and because spending he be restricted in the extreme until 2020 because of covenants in the sale agreement, winning is impossible.  Why rush a kid north when the difference would be meaningless in the grand scheme.  Winning 73 games instead of 65 is not a valid reason to start the arbitration and free agency clock for a Scott Boras client.

Javy Baez has been a little different.  He’s hitting .219 this season in Iowa with 10 home runs and 12 steals, and is clearly not quite ready for the majors at the age of 21.

The Cubs are stockpiling big bats that will replace the limp noodles currently misused by Nate Schierholtz, Darwin Barney, and the perplexing Mike Olt.  Ten of Olt’s 23 hits have been home runs, and he has only scored five more runs than his HR total.

Time will tell whether the bright shiny prospects Chicago is all atwitter over will see their productivity continue and blossom at the major league level, but for now fans are looking for hope anywhere they can find it.

An infield of Bryant, Starlin Castro, Javy Baez, and Anthony Rizzo with Schwarber behind the plate with Junior Lake, Jorge Soler, and Albert Almora with Arimendy Alcantara as a wild card is a pretty damn intriguing lineup.  Who will pitch for the Cubs is a different discussion entirely.