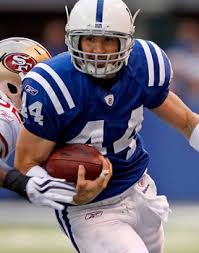 There are few better feelings in team sports than looking in a teammates eyes and knowing he’s laying it all on the line. That was the feeling Dallas Clark gave his Colts teammates.

There are few more recognizable images in Indianapolis Colts history than tight end Dallas Clark turning back toward quarterback Peyton Manning to find the ball as he ran one of the countless seam routes that led to franchise records in receptions and touchdowns for tight ends.

The Iowa born and bred tough guy with the ever-present smile and porn-stache would snare the ball, turn and sprint – or turn and get the living snot knocked out of him.  Sometimes he got up quickly, and sometimes he didn’t.

Throughout his career, there were very few guys Clark lined up alongside who fans and teammates would have preferred next to them in a foxhole.  He was a selfless and gifted warrior who did what was necessary to move the chains and put points on the board.

On an offense filled with flashy marquee players destined for the Pro Football Hall of Fame, Clark was the grunt whose dirty work was essential in winning the Sunday wars.

Clark will sign a one-day contract tomorrow, and retire a Colt.  There were two final seasons with the Tampa Bay Bucs and Baltimore Ravens, but he never looked right in those jerseys.  Wearing the iconic he blue and white #44 of the Colts is how Indianapolis will always see the 35-year old.

With Marvin Harrison and Reggie Wayne on the outside, the Colts needed someone with the elusiveness and large stones to exploit the vacated middle of opponents’ defenses, and owner Jim Irsay knew it.

Former Colts president Bill Polian recounts one of the few draft day conversations Irsay initiated during his time in Indianapolis.  Irsay asked Polian who they were considering with the 24th pick of the 2003 NFL Draft.  Polian said it was down to Clark and another player.  Irsay simply said, “I’d take Clark.”  Polian agreed, and the final piece of the puzzle was in place to unleash one of the most relentless offensive machines in NFL history.

It seems impossible that was only 11 years ago.  For young players who think they are going to play in the NFL forever, they should look at Clark.  After just over a decade, he’s finished at the age of 35.

Clark was fearless over the middle and there was a cost.  He played in all 16 games only once for the Colts – in 2009.  It was also the only year that Clark earned a trip to the Pro Bowl and was selected as a first team All-Pro tight end.

Because of injuries, Clark only started 23 games after that magical season when he grabbed a career high 100 passes for 1,106 yards.

Click here to get your teeth fixed by the best dentist in Indy – Dr. Mike O’Neil

There is no doubt that Clark will join many of his teammates in the ring of honor, and rightly so.  He played football with little regard for his health, and both paid the price and reaped the rewards.

Clark played a man’s game like a man, and dignified the Colts and NFL with his presence.  Tomorrow, the Colts will begin the process of thanking him for nine years of taking shots and coming back for more.