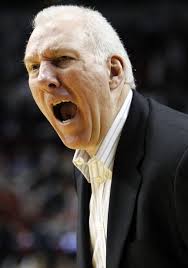 Gregg Popovich has led the Spurs to play basketball the right way, and not coincidentally five championships.

Selflessness on both ends of the basketball court doesn’t always beat a team of self-possessed stars, but it gives a team a fighting chance.  That’s how championships are won by small market teams like the San Antonio Spurs – and potentially by the Indiana Pacers.

Experts are spending the morning dissecting the Heat’s first loss in an NBA Finals since 2011.  Fatigue is a big part of the discussion as the Heat have played a virtual season of playoff games (87 games) over the past four years, but the reason the Heat got beat is the same as it almost always is in a seven-game series – the better TEAM won.

The Spurs subvert all selfish impulses to function as a single entity, and the result is basketball the way it is meant to be played.  It’s not some star-driven create off the dribble mess played by men identified by single names, but a beautiful ballet of movement and passing that creates open shots with far more regularity than individual excellence.

Popovich is driven, focused, detailed, and the creator of a culture that defies the momentum of marketing-first decision making that has driven the NBA since David Stern took over as commissioner just over 30 years ago.  Sure, he can be prickly with the media, but if you knew a lot of the people in the media, prickly would likely describe you on your best day.

The Spurs are built to win games, not sell jerseys, and that is what made their absolute dominance over the Heat a spectacle worth examining.  While LeBron James operates like a corporation, the Spurs play basketball for one another and for their coach.

When James was asked last night about his plans for next year, his response was telling, “My team will sit down, we’ll deal with it.  The key phrase in his answer is “my team.”  He’s not talking about the Heat, but his group of advisors who plot the course for his career.  While James is very selfless on the floor, it appears as it always has that James is every bit the strategist off the floor that he is on it.

Will the Pacers return to Bankers Life Fieldhouse with love for one another and a collective commitment to excellence, or because they are paid a ton of money?  Will Pacers management allow their players the chance to return after the total disintegration of the positive vibe that resulted in a 33-7 start to the season?  Can Frank Vogel inspire the same level of team-first camaraderie as Popovich, or is he a camp counselor afraid to upset the collection of egos that ran wild in the latter half of 2013-2014?

“Some selfish dudes in here,” is the Roy Hibbert quote that perfectly captured the Pacers as they unwound toward the end of the regular season, and selfish is one trait that kills a basketball team.

This offseason, like all off-seasons, will tell who is in the game for the cash, and who plays for rings.  The only team for whom we know the answer as an absolute certainty is the Spurs, and not coincidentally they are the guys wearing the rings.