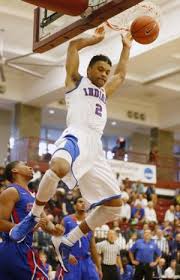 James Blackmon Jr. joined George McGinnis and Oscar Robertson as Indiana All-Stars to score 60 or more points combined in the home and home games against Kentucky.

The Indiana All-Star basketball events are wonderful traditions, and should continue whether or not people show up to watch.  It’s great for the very best at any pursuit to assemble and create life-long memories and friendships.

But let’s find another victim, can we?  The Commonwealth of Kentucky is not churning out hoop heroes with nearly the same regularity as the Hoosier State.

Indiana has throttled Kentucky 13 straight times, and 20-of-21.  There is no drama in this supposed competition and whatever rivalry might have been in full flower in the days of Wes Unseld, Jack Givens, Rex Chapman, Winston Bennett, Darrell Griffith.  Today, it’s an exhibition between teams on entirely different tiers.

Indiana has several neighboring states, and high school basketball players are more competitive in Illinois, Michigan, and Ohio than they are in Kentucky, and it’s not close.

That’s not a rip on Kentucky, or the kids who try like hell to compete with their neighbors to the north.  Indiana churns out excellent players by the busload, and Kentucky would struggle to beat the third or fourth best set of 12 Hoosiers.

Kentucky would be better served by playing in an all-star series against West Virginia.

Some are calling for the all-star program to be abandoned, and that would be an enormous shame.  Very few people watch summer basketball, but more often than not it’s wonderful for the kids.  They get to play more basketball with similarly talented kids, and more importantly are the idle hours spent crammed together in hotel rooms watching TV and hanging out.

The reasons for the disparity in quality of play are many, but include difference in population and availability of excellent trainers and facilities.  Indiana is an anomaly in that the best athletes play basketball, and there are basketball-specific trainers who work with kids from a very young age to build strong fundamentals.

Take soon-to-be drafted Michigan State guard Gary Harris.  Prior to becoming the 2012 Mr. Basketball in Indiana, he worked tirelessly with Christopher Thomas of 100% Hoops to master the intricacies of ball handling, shooting, and defensive movement.  That work started when Gary was eight.

Multiply that level of work by dozens of kids in every class by similar training programs all over the state, and it’s little surprise that Indiana pastes Kentucky twice each year.

Since 1990, zero Keckucky Mr. Basketballs have been drafted in the first round of the NBA Draft.  When Harris is made a lottery pick on June 26th, he will be the fifth first round pick in the last seven years who was an Indiana Mr. Basketball.  Add non Mr. Basketballs like Rodney Carney, George Hill, Jeff Teague, JaJuan Johnson, Marquis Teague, Gordon Hayward, Tyler Zeller, and Mike Conley, and that’s a lot of excellence churned by Indiana in a decade.

The history of the series is nice, but the games have lost all potential conflict, and that is more obvious in the Bluegrass State than in Indiana.  The game hosted Friday night in Kentucky wasn’t at Freedom Hall, Rupp Arena, or the Yum! Center.  It was played in front of a sparse crowd of 1,000-ish at Transylvania University.

Last night’s Indiana win was watched by almost 7,000 at Bankers Life Fieldhouse in Indianapolis, but not because there was any doubt about the result.  People just love watching the all-stars here and the 2014 class is a good one with Indiana bound James Blackmon Jr., Mr. Basketball Trey Lyles (unable to play due to illness) Trevon Bluiett, and others.

These all-stars deserved a quarry that requires more heavy lifting than can be provided by Kentucky’s best, and that will be true next year too.