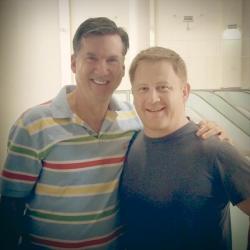 Exhausted from a competitive race, Hagan & Sterling walk out of the Emmis Building after a year of fun.

Whatever else might be said about the weekly effort Fox 59’s Chris Hagan and I put out on 1070 the Fan each Saturday, those two hours were always the best of my day.  Today’s final edition was no different.

Indy Star columnist Bob Kravitz and Rick Venturi joined us to shed their well-informed insight about the continued recovery of Indianapolis Colts owner Jim Irsay, and we discussed the Indiana vs. Kentucky all-star series that appears to have lost all public momentum.

As has been the case every week, there were a lot of laughs.  Chris is a funny guy, and we are comfortable enough with each other to take and receive occasional shots without turning surly, so mockery ensues – as it always should.

There was also a footrace race that was ill-advised.  I was quite sure that I could beat Chris in a length of hallway race, and Chris takes pride in his speed, so between segments we faced off.

I am still not sure who won, but there is no doubt that Chris with his piston-like, driving, short strides got to his maximum speed more quickly and that I was closing in after the midway point of the spectacle.

My undoing was the voluntary shedding of my shoes.  Chris wears flip flops to the studio every week, and I sport New Balance running shoes.  Outfitting him with running shoes was impossible, so I agreed to run bare foot so there was no advantage.  Honestly, my motivation was to strip Chris of all excuses because I thought I would coast to a win.

Not that I believed Chris to be slow, but while I did not have blazing speed as a youth, there hasn’t been much erosion in my top end speed.

This was not my first rodeo on the Emmis sixth floor hallway track.  I am a veteran of several contentious races against the very fleet Eric Wunnenberg, the sales manager at 1070 the Fan, and I knew where to begin deceleration in order not either crash through a window or clip the pool table.  That advantage nearly served my ass, but while I believed the race result favored my slightly, most impartial observers gave Chris the edge.

So now, it’s on to CBS Sports 1430 to begin another chapter of my reinvention as a host.  I spent a long time in radio management, but that vocation became a tired routine of finding efficiencies rather than motivating creative excellence.

The grind of firing people wore on me over the years, and despite a mostly favorable environment at my last stop, I decided life was too short to live 268 miles away from my wife and son with the reward being the pleasure of deciding whose life to redirect through a change of employment.

I always wanted to be a host.  Performing is not only fun, but I was relatively decent at it back in Chicago at a couple of improvisational theaters.  Radio and improv always seemed to be very similar (they are), so finding a way to build my brand into that of a paid content provider seemed like a reasonable notion.

Launching kentsterling.com was a great first step, and other opportunities were offered.  Beginning a week from Monday, I get to build and execute as good a sportstalk radio show each weekday on CBS Sports 1430 as I can.  And I can’t wait.

My producer is Nick Bosak, a passionate, versatile, and dedicated young man who I have worked with twice before.  Not sure what the future holds, but these Saturdays with Chris have been a lot of fun and very educational.

While June 23rd can’t come fast enough, today was a little melancholy as I really like Chris and producer David Dearing, and Saturdays with them were joyful.

Thanks to Jeff Smulyan, Charlie Morgan, and Greg Rakestraw for welcoming me back when I returned from St. Louis 15 months ago.  And I’ll always be very thankful to all the people who gave me the benefit of the doubt when I was less sure about how radio is done well from the inside.

One thought on “Final “Ahead of the Curve” filled with great guests, laughs, and a race for the ages”