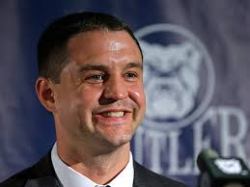 Brandon Miller is young, eager, and ready for the second shot at a stacked Big East schedule.

Butler’s Basketball team had a tough time during its first year in the Big East Conference.  Brad Stevens left to become the head coach of the Boston Celtics, Roosevelt Jones was lost for the season to injury, and the Bulldogs lost 11 games by a total of 48 points.

The 2013-2014 season was a baptism by fire for Stevens’ replacement Brandon Miller, who continued to learn and teach throughout the season.  Impossible to dislike, Miller will looks forward to a second season with Jones healthy again and a roster bolstered by the arrival of Indiana University transfer Austin Etherington.

Hinkle Fieldhouse is in the middle of an aggressive facelift and remodeling job, and the Bulldogs want to win the close games they lost.

Butler is Butler.  The culture doesn’t change even if the coaches do.  Barry Collier got things rolling before he left to lead Nebraska.  The reins were handed to assistant Thad Matta who left for Xavier and then Ohio State.  Assistant Todd Lickliter won big, and scampered to big dollars at Iowa.  Virtually unknown assistant Stevens was next and took the Bulldogs to consecutive NCAA Championship games.

Now, it’s Miller’s turn, but Butler is no longer in the Horizon League with regular true/false 100 level exams against Youngstown State, Loyola-Chicago, and UIC.  These are now grad student level essay tests administered by storied and well-budgeted programs like Georgetown, St. John’s, Marquette, and Villanova.

Miller joined me yesterday on my radio show (weekdays – 3p-6p on CBS Sports 1430 in Indianapolis) to talk recruiting, the reconstituted roster, and discuss the challenges he faced as a first-year head coach for a team taking its second big leap in conference prestige in two years.

One thought on “Butler Basketball – Bad luck and year one in the past, coach Brandon Miller looks ahead”