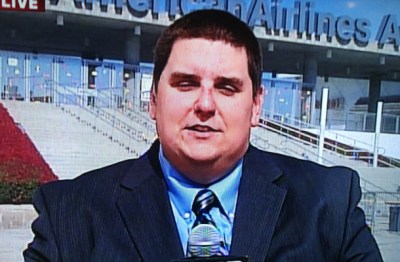 The “Round mound of LeBron sound” is breathlessly bringing updates to Cleveland fans who are destined for misery – again.

That’s the old saying children embrace, but adults pass on all too often in both romance and sports allegiance.  Cubs fans have looked longingly toward next year for 105 years, divorced men and women cling to the belief that their ability to cast a longterm partner will improve, and Clevelanders continue to hope their city isn’t cursed.

When LeBron James left Cleveland four years ago, fans felt jilted – particularly because of the manner he chose to announce his decision.  Sitting with Jim Gray is never a good idea, but listening to his thoughts about building a TV show to make an announcement better handled personally and quietly as a courtesy to his soon-to-be former employer and fan base was pure moronic folly.

Gray’s ever-present hunger for self-promotion was indulged, and James looked ridiculous.  Only the looney in Cleveland (a significant proportion of the population) would have begrudged James desire to play in Miami had he embraced class over Gray’s dog and pony show on ESPN.

This time around, James has been removed from any public face or voice of this specific decision.  He seems not even to be talking to his longtime personal beat guy – Brian Windhorst.  Coverage of LeBron may be a circus, but James isn’t the lion tamer, and Gray is not standing in the center ring wearing a top hat.

The LeBron-James-is-coming-home hope that has been exhumed and revived by those living in the world’s largest factory of sadness has not been aided in any way by James or anyone from his camp.  The Cavs have gone all-in to try to woo the icon who abandoned them, but they had no choice.

With Kyrie Irving, Andrew Wiggins, Anthony Bennett, and other spare parts, they are a long way from contending – even in the woeful  Eastern Conference.  With James, they can surround him with pieces including those youngsters that make them instant contenders.

Fairy dust is dancing in the heads of Clevelanders, and why shouldn’t it?  Indulging in wishful thinking helps the hopeless watch today become tomorrow with a smile on their faces.  Hope doesn’t make reality better, but it’s an effective distraction from the absolute certainty of the end of our physical existence – especially in Cleveland.

Today will be a more interesting Thursday in the Mistake by the Lake because of James carrying out this charade of a decision for another day.  Sure, the cruel blow of the news James will return to Miami will make Friday awful, but this isn’t the first time for Cleveland natives to do-si-do at this dream-induced square dance.

James Cavalier jerseys that remain from the 2010 bonfires will burn, and the addition of the “For6iven” tee-shirts will light up the Cleveland skies.

Click here to get your teeth fixed by the best – Dr.Mike O’Neil at Today’s Dentistry

James will likely return one day to Cleveland, and all will truly be forgiven, but it won’t be for the 2014-2015 season.  His best chance for winning the 2015 NBA Finals lies in Miami, and that is why he will stay in Miami.  That may change in 2016 or 2017, and at that point James’ decision will change too.

This decision is not a referendum on James’ love for a city or its fans.  It’s about the chance to win another championship.  The endless coverage of this bizarre melodrama that fans the flames of hope in a city where those flames have caused a river to burn isn’t on James’ head – even if he has done nothing to silence it.

Cleveland is responsible for its own anguish this time around.  That city’s fans should have known better all along.

5 thoughts on “LeBron James Decision II – Cleveland should brace for another disappointment, but this one is not on LeBron”