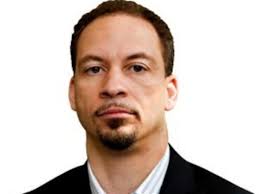 ESPN’s Chris Broussard is one of the many being forced to talk about LeBron James’ decision without saying anything.

Never have so many talked so much about a story without any facts.  Brian Windhorst is on every Sportscenter saying that he doesn’t know anything again and again and again.  Josina Anderson stands in the streets of Cleveland talking about the people parked outside James’ house.

Mark Schwartz is in Miami talking for two minutes, but communicating nothing.  Chris Broussard is reading tea leaves in the ESPN cafeteria trying to devine which way LeBron might be leaning.  Ramona Shelburne is packing this morning in Las Vegas after James jetted back to Miami last night.

Marc Stein is trying like hell not to get beat by Adrian Wojnarowski, and Chris Sheridan is praying that James picks Cleveland as he has been reporting he will.

LeBron James deciding between Miami and Cleveland is the biggest sports story of the summer, and LeBron is milking every news cycle out of it he can.  That’s the smart play.  There is no such thing as being too marketable, too famous, too recognizable.  His marketability is already at the top of the pile, but he can always demand more based upon being moving from the Mount Rushmore of the most famous athletes in the world to the podium where only one fits.

The cost of Lebron James’ patient deliberation is the integrity and ego of the media who are answering the public’s demand for anything resembling new information by giving blanket coverage to a story without facts.

What we know is that James left Las Vegas after hosting his annual skills camp.  He met with Pat Riley Wednesday at 5p.  The decision is between Miami and Cleveland.  There you go.  Try to say that hour after hour, day after day after day.

It’s misery for these poor bastards, but the alternative is to tell consumers that they will share news when there is news.  That would send those in need of a constant stream of mindless yammering to another port in the storm, and that is poor media strategy.  I would love for ESPN to cop that attitude, but they didn’t become the iconic brand of sports media by ignoring customers’ wishes.

So Ramona, Marc, Mark, Brian, J.A., Chris, Josina, and the ever-expanding gang of ESPN producers and anchors will continue to brainstorm new angles and perspectives they can utilize to trick viewers, listeners, and readers into believing the latest Sportscenter has the latest information – when there hasn’t been a fresh nugget that would allow for anyone to believe what jersey he’ll wear next year since he filed for free agency.

This is not just putting lipstick on a pig – it’s reapplying different shades of lipstick every hour.

There is no telling whether James sits back over breakfast laughing at the speculative mumbo jumbo being proffered as news.  As good as James is on the court, he might be even better at toying with the media.  That is either through abject indifference or masterful manipulation.

Those reporters aren’t idiots.  They know they have been cast by James in this static melodrama, and they look forward to each appearance on the mothership with fear and loathing – knowing that millions of people are watching and mocking their fatuous attempts at relevance, “Yeah, this is why I worked my ass off in journalism school and at the (fill in the name of a respectable newspaper here).”  That’s what media people always say when faced with repeated demeaning tasks.

That’s the pain in the ass about working in the media.  Rarely does it have the power.  In this case, LeBron has all the power, and he isn’t shy about letting everyone know it.  The people yammering into the lenses of expensive cameras feel smaller and less relevant every time they do it.

The media are the storytellers, but today have to tell the same story again and again.