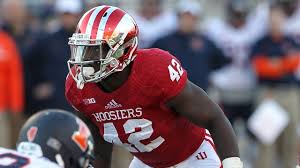 Hoosier linebacker told me yesterday that if Indiana doesn’t finish in the top two of the Big Ten East, he will be disappointed. I had to ask him to repeat it.

It’s been awhile – a long while – since Indiana University students and alums got themselves all wrapped up in the fortunes of their football team.

There was a brief time after Terry Hoeppner was hired when the magnetism of his personality compelled optimism, but his illness and tragic death gave fans the feeling that success was impossible for the losingest program in college football history.  Winning appeared to be unattainable, impractical, and out of the question.

When athletic director Fred Glass introduced Kevin Wilson as the latest candidate for career ruin as the architect of another brief era of misery, fans and media were conflicted.  He seemed equal parts angry, determined, and impatient.  At the time, I thought he was going to either self-destruct or succumb to the sheer weight of the difficult terrain ahead.

There was a thin sliver of hope that Wilson possessed the intestinal fortitude for the relentless work needed to build the brand of Indiana Football beyond being known as the last choice for football players to continue their careers as a member of one of the teams in the Big Five conference.

Some reasonably smart and talented coaches had failed to make the slightest turn toward excellence with the USS Hoosier, and Wilson’s voyage on the bridge of this wreck of a giant ship looked to be no different.

Wilson began building a high octane offense.  That was his calling card as a successful assistant coach, and recruiting toward being a part of an offensive juggernaut was all Wilson had to lure talent to Bloomington.  If a kid wanted to catch, run with, or throw the ball often enough to set records, Indiana was not a bad choice.

Basketball on the gridiron had worked elsewhere, and it certainly would stand out in the Big Ten.

Indiana had two additional trump cards to play, and they have proved valuable.  An increased budget for the coaching staff continues to allow Wilson to go out and get leaders who are coveted by others rather than build a staff constrained by unreasonable budgetary requirements.  The second is a work ethic that is unceasing and indomitable.

If Wilson has flaws, a willingness to bust his ass and trust his plan is not among them.  Effective leaders pay attention to process and evaluate/adjust that process based upon results.  That is the relentless message Wilson shares with the media, and I like it.

Wilson is football’s version of Sisyphus – he began pushing the rock up the hill from day one, and finding it back near the bottom of the valley each morning.  That the rock came to rest six inches farther from the bottom each day was not lost on Wilson, and that was enough validation to keep him going.

The work is obviously not finished or the cause of meaningful reward yet.  Indiana has yet to post a winning record under Wilson or play in a bowl.  Anyone claiming they know for an absolute certainty that Wilson will be remembered along with Bo McMillan and Bill Mallory as the lone successful coaches in Indiana Football history sees the world through crimson glasses.

Listening to players and coaches, and believing that they believe in Wilson and the bright future of Indiana Football is one thing, but claiming the gift of prescience in evaluating the 2014 Hoosiers and beyond is the act of a fool.

Click here to get your teeth fixed by the best – Dr. Mike O’Neil of Today’s Dentistry

The crucial fourth season of the Wilson era will begin Saturday with what should amount to a tune up against Indiana State in front of a crowd of uncertain size.  That audience wants to hope for the best; they want to believe that the long run of poverty is over, and a pride unknown minus a seven-year stretch from 1987-1993 might be allowed to infest the souls of alums and students alike.

Indiana is either on the precipice of taking a significant step forward or everyone associated with the Hoosiers program is wrong – really wrong.