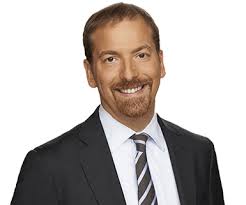 Chuck Todd is a reasonable and smart host in charge of “Meet the Press” – a show where the unreasonable debate the arcane.

Here’s a new idea – we don’t need to agree with each other to like and respect one another.

If media has done us a disservice over the past 30 years, the debate-related political conflict presented as drama by television and radio has enforced in us a need to take one another way too seriously.

Like Bill Murray says in Stripes, “We’re all very different people. We’re not Watusi. We’re not Spartans. We’re Americans, with a capital ‘A’, huh? You know what that means? Do ya? That means that our forefathers were kicked out of every decent country in the world. We are the wretched refuse.”

So why can’t we understand that disagreement doesn’t equate to disrespect.  You might be right, I might be right, or we might both be right (or wrong).  Who gives a damn one way or the other?

We process information through our own unique filters, and the result is almost always an intellectually flawed position that reflects a perspective that is uniquely our own.

The midterm elections reflected an angry dissatisfaction for Barack Obama’s presidency.  It happens in midterm elections every four years.  Anger is stoked by addlepated candidates who understand ill-temper is a good motivator to get people to the polls.

The average American give as much thought to who they vote for as they do what they eat for breakfast.  I show up at the poll with three tactics – vote against incumbents, when not sure who the incumbent is for local office – vote for the most familiar sounding name, and vote not to retain all judges.

Why?  Shorter terms equal better government, judges should not serve on the bench for a lifetime, and who gives a damn who serves on the city council?

Am I really supposed to research the candidates for virtually meaningless posts?  Their goal is to sit in endless meanings discussing the language of governmental measures that by and large have no effect on anyone.  How could any of the candidates be worth a damn when by winning they are sentenced to a term of pretending to pay attention during public hearings with crankcases blathering about their concerns over easements, zoning waivers, and expenditures on swingset safety updates?  I would rather be imprisoned.

So a guy running has the same name as a friend who lives in Dallas?  I’m in!  Guilty!

Does that make me irresponsible?  Sure, but compared to the 70% of the people who don’t vote at all, I’m the patron saint of democracy.

The point is that whatever our beliefs, can’t we just listen, present our thoughts, and then politely agree to disagree by buying each other a sandwich or beer?

Democracy is kind of an idiotic concept that confers power to an electorate that refuses to take part in any portion of the process.  In countries with monarchies, people cede control to a family willing to give a damn about the mundane issues of the day.  They throw their hands up and say, “You know what, it really doesn’t matter enough for me to care, so let’s have the Tudors, Grimaldis, or the Al Sauds run stuff.”

They go about their business, hope for the best, and sleep without concern.

Listen to the men and women on Meet the Press discuss the issues of the week.  They are all relatively intelligent, but disagree, bicker, and yelp at one another.  Is there any chance for a house of representatives with 438 members or a senate with 100 to embrace the pursuit of common ground in legislating effectively?  Of course not, so why worry?

We each have lived unique lives, developed a similarly unique set of beliefs, and trust our values are pure.  No one is purposely espousing idiocy.

Can’t we accept the inherent flaws in our own arguments as quickly and easily as we dismiss all who disagree with us?

To assume we each hold the keys to wisdom is as silly and arrogant as it is myopic and moronic.

No one has to agree, but we should all have the respect necessary to listen with the same energy we use to share our own philosophies.

For 230 years, Americans have continuously squabbled with results including idiocy like a Civil War, prohibition, capital punishment, slavery, and a bizarre ban of animals mating publicly within 1,500 feet of a tavern, school, or place of worship.

Sure, we’ve eliminated most of the truly egregious legislated wackiness, but the time has come to relax, listen, and buy beer for people.

Now that sounds like a country we can all be proud to call home!

[Ed. note – By espousing an informed apathy, I am guaranteeing that no one reads what has taken me a significant investment of time and effort to produce.  That’s alright.  It’s the price I am willing to pay for being right]

4 thoughts on “Meet the Press – No more arguing about politics; none of us is very bright, each of us is equally wrong”