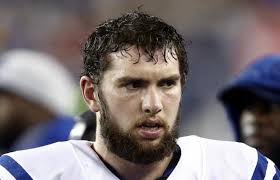 Andrew Luck was under siege yesterday as he failed to enjoy the worst statistical game of his career.

So much to write about the Indianapolis Colts, so little time.

The Colts confirmed what they are – again – in a humiliating loss in Dallas.  They are incapable of losing to the worst, but equally unlikely to beat the best.

Colts general manager Ryan Grigson has put together a good team – mediocrity is everywhere but at quarterback, special teams, and cornerback.  Because of injuries, the right side of the offensive live was terrible yesterday.

I’m a big fan of hope, so shutting the door on the possibility that the Colts might qualify for the Super Bowl is not something I’m prepared to do, but for the Colts to be competitive in Foxboro a lot would have to change for both the Colts and Patriots.

Yesterday, the Colts ran for one yard against a team that allows an average of 103.1 yards per game.  Andrew Luck posted his worst career passer rating (41.7) against a very average pass defense (23rd in the NFL), but it wasn’t all his fault.  Receivers dropped ball after ball and the left side of the Cowboys defensive line faced only passive resistance on their way to harass Luck.

According to profootballfocus.com, right tackle Xavier Nixon graded out as a -8.8.  The grades on that site are not perfect, but I’ve never seen a -8.8 for a tackle, and whatever the skill level of the grader, a -8.8 shows the historically inept pass blocking that caused Luck so much trouble.

Oddly, Luck’s two interceptions came on plays where the Cowboys were unable to get near him.  They also came after the game’s result had already been decided.

If the Colts want to compete for a title, cleaning up turnovers and penalties are a great place to start.  Another three giveaways yesterday raised the number for the last five games to 15, and 31 for the season.  Their turnover margin is -6, which ranks 23rd in the NFL.  The penalty yesterday against linebacker Jerrell Freeman for taunting that gave the Cowboys a first down when they would have otherwise punted on the first drive of the game was brutal, and put in motion events that led to 42-7 misery.

The call against Freeman was questionable, but good players for championship teams don’t put referees in a position to make a questionable call.  They make good plays appear routine and celebrate after the game.

The DNA of the Colts through the first two years of the Grigson/Pagano regime was to avoid beating themselves while making enough plays to win.  This season has been different.  They are good enough to play sloppy football against bad teams (Jacksonville, Houston, Tennessee, NY Giants, Cleveland, and Washington) and win, so they do.  They are not good enough to indulge in lackadaisicalism and beat more talented teams, so they have lost to Denver, Pittsburgh, New England, and Dallas.  In the middle are Cincinnati, Baltimore, and Philly, with whom they are 2-1.

What will be interesting is the level of patience fans are willing to allow if the Colts bow out early in the playoffs again.  Luck is seen as an elite quarterback with a mediocre offensive line (minus Anthony Castonzo), and the defense, minus Vontae Davis, is filled with a bunch of okay players too.

It won’t take long for the fans who are staunchly in Grigson’s corner to start yelling about how any fourth grader would have drafted Luck, and without him this Colts team would be 3-12 heading into the final weekend of the season.

The truth is a little more nuanced that that.  Finding Freeman in the CFL was big, and drafting wideouts T.Y. Hilton and Donte Moncrief in the third round were both huge gets.

Even more important is owner Jim Irsay’s disposition toward years peeling from Luck’s career without postseason success.  The odds of lucking into a third franchise quarterback virtually without interruption is an impossibility, so each year carries additional importance.

This all assumes that the Colts continue limping as they have over the past few weeks.  If they recapture the level of play during the playoffs they (and we) enjoyed from mid-September to mid-October, ignore everything I wrote here.

And remember, fan bases for 20 teams would swap spots with you in a second.