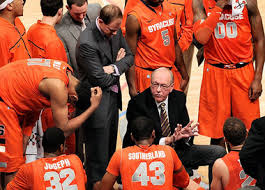 Nothing like Jim Boeheim drawing up a play for the Syracuse Orangemen to engage fans.

Normally, I’m not a fan of Quixotic causes, but a couple of potential rule changes would make college basketball a lot more fun to play and watch, and neither have anything to do with the shot clock.

Sadly, neither have any chance at all to be implemented.

The two rule changes I favor are a complete elimination of non-media timeouts and a reversion to the time when replays were enjoyed by those watching the game at home and not used by the referees to confirm or overturn calls.

Replay is a wrongheaded tool in all sports that elevates the importance of the result of the game beyond that of the enjoyment of watching the game.  All fans and players should care whether their team wins or loses, but not so much that pixels are examined for minutes on end to determine the efficacy of a referee’s judgment.

Watching and playing sports is a leisure activity whose significance has lapped reason many times – particularly in college.  I understand that self-immersed goofs who work in professional sports will always believe that society orbits them, but college sports can serve as leaders who show us the way out of our delusion that Purdue sweeping Indiana in basketball can alter the spin of our planet.

As for timeouts, coaches continue to diagram rather than teach.  Prepare a team during practice.  Teach during practice.  Allow the games belong to the kids.  Back in the day when the clock continued to run after made buckets, I understood the need to call timeouts to keep time from expiring, but timeouts today are used specifically to allow coaches to control game action, which allows their assumption of power and control to grow beyond logic.

In last night’s Louisville vs. Georgia Tech game, Georgia Tech took its last timeout with 52-seconds left, and Rick Pitino ran through his allotment at the 3:00 mark. The result was a thrilling finish that allowed the kids to make plays and decide the result with their ability and knowledge.  It was almost hockey-like, and what is more exciting than the final minute of a hockey game decided by one goal?

Neither of these rule changes will ever come to pass because the fans and players have virtually no voice in enacting rules governing play, and the result is apathy by fans and ignorance from players who are told where to go but not why.

Coaches run the show, and no group in the history of society is more self-important than coaches.  They would prefer to control players like chess pieces than allow fans and players to enjoy the game.

One of the biggest challenges of collegiate athletics is to attract students to games.  No-shows are a huge problem.  For some perspective as to the enormity of the issue, Alabama football’s student season ticket holder no-show rate is 35%.  The problem is that just as the game should be at its most thrilling, constant stoppages of play make the final minute the most tedious.

Eliminating timeouts would increase the importance of teaching the game ten-fold, reduce TV time for far too visible men like Tom Crean, Tom Izzo, and John Calipari, and make games much more watchable for fans.  It’s a win/win/win, which means it will never happen.

As for replay, the question of using easily used technology in order to make sure calls are correct is so logically answered in the affirmative that making the argument it should be abolished is mocked as antiquated lunacy.  That is until the importance of a basketball game is rendered to it’s essential elements, in which case “Who cares?” is the only relevant question.

Ironically, there will be a rule change that makes no sense at all.  Reducing the shot clock from 35-seconds to 30-seconds is a solution in search of a problem.  Who benefits from that change?  Players?  No.  If anything, coaches will be able to exert more control over the game.  Fans?  What does a fan benefit from players having five fewer seconds for their favorite team to find a quality shot?  Coaches?  More possessions equals more opportunities to coaches ’em up (or down), I guess.

My advice for all leagues trying to deal with pace of play issues is to engage fans in the discussion.  No fan enjoys a timeout, and fewer revel in the “thrill” of a replay review.  Eliminate the negative, and all that remains are positives.