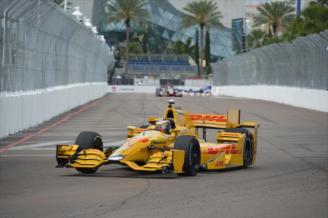 After the cancellation of the season-opening race earlier this month in Brazil, the Verizon IndyCar Series eagerly roars to life this weekend on the streets of St. Petersburg, Florida.

Practice began Friday for Sunday’s Honda GrandPrix of St. Peteresburg (3 p.m., TV: ABC; Live Timing and Scoring: indycar.com). Though rain brought a halt to activities Friday afternoon, the rest of the weekend’s weather should provide for a beautiful start to the IndyCar season.

If you’re in the area like so many Hoosiers are this week, I highly recommend adding this race to your agenda. It’s a first-class event that is greatly embraced by the city and residents. And watching Indy cars in 70 degree sunshine with a backdrop of palm trees and the Tampa Bay isn’t a bad way to roll in March.

The season begins with many intriguing story lines. 24 cars will take the green flag for Sunday’s race. Many drivers are either racing in the series for the first time or driving for a different team in 2015.  The biggest move in the off-season was Simon Pagenaud joining Team Penske and 2014 series champion Will Power. Those two, along with Helio Castroneves and Juan Pablo Montoya, make for a heavyweight one-two-three and fourth uppercut punch.

One of the biggest driver stories of the year could be talented and charismatic rookie, Sage Karam, driving for Chip Ganassi Racing. Although only on a partial schedule at this time, Karam could quickly become a youthful popularity jolt to the series. He went from the last row to finish in ninth place in last year’s Indy 500, and he certainly doesn’t lack for skill and confidence.

But the biggest change for 2015  is the introduction of new aerodynamic body kits by manufacturers Chevy and Honda. Fans have debated the aesthetics of the designs. What can’t be debated is that the publicity they’ve already created in the racing community has been a boost for the series. And their ultimate purpose of promoting engineering innovation and increasing speed have already been recognized after one day of practice.

“Racing, first of all, is all about innovation and development and that’s what we have with the aero kits,” Andretti Autosport’s Ryan Hunter-Reay said. “The engine manufacturers have been tasked to put on as much downforce as efficiently as possible, and what you’ve see is a complete transformation of this IndyCar where Chevy has its own look and brand and Honda has its own look and brand and stamp on the car.

“The performance is up, track records will be broken this year, and they look like you need to wear protective gloves around them, so they look awesome. They look like they should, which is incredibly fast and somewhat scary.”

Expect track records to fall like dominoes as the series plows through a busy schedule starting this weekend.