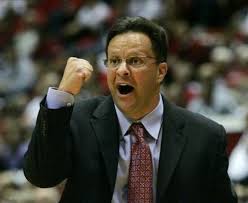 If he’s fired, Tom Crean will be able to look back without regret and count his severance when he’s fired.

With talk of potential for a coaching change in the Indiana University basketball program, there are two camps of passionate fans I hear from regularly – those who are very black and white – pragmatic types who want Tom Crean gone because Indiana should be an elite program because if Indiana isn’t elite at basketball, what the hell is the fun of rooting for Indiana at anything?

The other group are those who have talked themselves into hoping that Crean can succeed, or have simply resigned themselves to the realization that Indiana is ordinary and no one better than Crean will accept the job.  I believe the second group is filled with those who for whatever reason feel that a person being fired is awful – as bad a thing as can happen to anyone.

These poor deluded bastards have either never been fired and live in terror each day may be their last at their current workplace, or they were fired in the past and have never recovered from the insult of that experience.

Crean’s situation is unique because if he is fired before July 1, 2015, he is going to walk out of Assembly Hall with severance so substantial it should be presented to him as a giant novelty check Powerball winners receive from grinning bureaucrats.

$11 million is a nice parting gift that will keep the Crean Family in the black for several generations if they take good care of the money, but that isn’t the part that people fixate upon when considering Crean’s tenuous hold on a very cool job.

They worry about the moment athletic director Fred Glass invites Crean into his office and thanks him for seven great years, then tells him the program’s needs have changed, or some such preposterousness.  It’s the sinking feeling in a man or woman’s stomach that some want to protect Crean from.

But just as parents want to encase their children in bubble wrap so no harm can come to them, allowing a little adversity into a loved one’s life can be a great gift.  Kids learn not to fall down because it hurts, and adults learn self-sufficiency and develop new talents because they get bounced.

Being fired is a hell of a thing, but once the initial shock wears off – and it is a stunning moment for an adult, kind of like being expelled from school.  Being told you can no longer do your best to help those likewise immersed in a difficult situation because of a dunderheaded boss is kind of stunning.

I’m sure it would be staggering to Crean, a guy who has ascended to the mountaintop of his profession – a dream job that pays him insanely to recruit and instruct teenage athletes to play a silly game.  I’m sure he feels today like the guardian of a prized but ultimately meaningless  fiefdom – kind of like being the king of Luxembourg – and that without his incredible efforts the place will crumble.

Of course, nothing could be further from the truth.  If Crean were dispatched this afternoon, given the way his mind works, he would have a plan to execute what was next before he drove from Assembly Hall to his house.  And the guy tapped by Glass to run Indiana Basketball would be rolling almost immediately.

Crean would call his father-in-law and brothers-in-law, ask for counsel from other trusted friends, and by nightfall be in the midst of putting together whatever he thought was his best course of action, secure in the knowledge that money was not an issue.

Maybe ESPN would call, maybe the Big Ten Network, or another school in need of a high-energy whirling dervish of arrogance who treasures the challenge of leading young men into battle on the hardwood might hire him.  Hell, even former Indiana coach Mike Davis has taken two other teams to the NCAA Tournament after leaving Indiana.

Being fired is a little like childbirth.  While the initial pain is life-altering and excruciating, after that last moment of anguish and shock, what stares back into your soul is the potential of what might come tomorrow.  At least that’s the way it worked with me.

No, you don’t get to do what you have worked for years to achieve with those you love and respect (if you are very lucky – as I was), but what’s next can be even better, cooler, more impactful and fulfilling.

Sometimes a kick out the window is actually what’s needed to allow a person to prove he or she can soar.

Crean being at the pinnacle of his profession might make a true chance at redemption difficult, but all he needs to do is look at his buddy John Calipari to see that being fired can be a great step toward something grand if the adversity is answered with diligence and resolve – two traits even Crean detractors know he has in abundance.

And the fans who believe Crean deserves another year or more could be dooming him to a future bereft of the new challenge being fired might thrust him into.

An end is a beginning too, and it will not take Crean more than a few minutes to figure out.  Fearing it on Crean’s behalf is narrow-minded and silly.  If you truly have faith in Crean’s work ethic and drive to succeed, you won’t fear change for Crean – you will encourage him to find his new path – and you might learn how to move past that challenge yourself.

You never forget the feeling of being fired, and you might never forgive completely those who pulled the trigger, but that moment can be the change agent that takes your life in a great direction.

If Crean learns that sooner rather than later, why would anyone say it’s a bad thing?