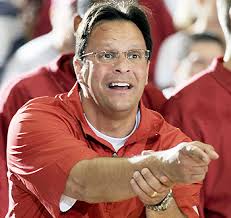 The heat is on Tom Crean, and what he might do to the roster to improve his stock will be a focus of fans during the offseason.

“It all works out,” has been the routine response to questions about Tom Crean’s practice of oversigning players without a publicly shared scheme for how scholarships might be available for the new blood.

Division One basketball programs are allotted 13 scholarships, and without knowing how many players might go pro or leave for supposedly greener pastures with eligibility remaining, many coaches engage in the practice of allowing recruits to sign letters of intent without a scholarship being available.  That’s oversigning, and it’s allowed by the NCAA as long as the program has reason to believe a scholarship will be open.

When no scholarships are available and a player is asked to transfer to clear space for the incoming recruits, that is called “Creaning”.  Indiana and Marquette (when Crean coached there) haven’t been the sole practitioners of Creaning, but given the name of the practice bears Crean’s name, it can be assumed he’s done quite a bit of it.

How does Creaning help Indiana win?

For elite programs, and expectation of players leaving for the NBA is always present.  Indiana has lost three players to the NBA prior to the expiration of their eligibility after the past two seasons – all of which were foreseeable – but the combination of transfers and recruiting swings and misses left Indiana with a glut of open spots last offseason and a lack of incoming seniors.

If a coach gets caught without a Plan B, he can wind up with less players than scholarships.  You can’t win with players you don’t have, so offers are extended to players who for a variety of reasons (lack of offers, poor academics, etc…) are still drifting unclaimed in the Spring.

Prior to announcing the transfers of Stanford Robinson and Max Hoetzel last week, Indiana had its full roster set for 2015-2016 because the team had no seniors nor likely NBA draftees.  Making room for incoming freshmen Juwan Morgan and O.G. Anunoby required two current Hoosiers leaving.

Math problems like 13-15=”It all works out” makes Indiana fans a little bit nervous.  Endorsing the morally questionable practice of “Creaning” requires winning.  Even Indiana fans, a singularly high-minded and demanding fan base that abhors all impropriety, would be willing to see the regular churning of players as a reasonable cost for championship contention.

Over the past two seasons, Indiana has disappointed fans with a 16-20 Big Ten record, the first double digit seed in program history,  and an 0-1 record in the NCAA Tourney.  Losing is a bigger issue than “Creaning”, but a sinking ship lowers all boats, and when presented with losing, Indiana fans tend to complain about everything.

What is the consequence for losing AND “Creaning”?

Lack of success plus “Creaning” makes Indiana look cheap and tawdry under Crean, and given a significant lack of certainty from all but athletic director Fred Glass that he is the long term answer to Indiana’s needs, there is now serious chattering that has led to fans passing on football season tickets and donors writing fewer big checks to the department.

Yes, boosters enjoy a lot of perks because they write checks, and one of them is the attention their opinions receive when the checks don’t arrive as anticipated.  Wins = $$$.  That is basic athletic math that has nothing to do with “Crean-culus”, but it might be his undoing.

The motto for Indiana’s athletic department is “24 sports, one team”, but when the football AND basketball teams fail to succeed, the money needed to run the other 22 sports successfully tends to dry up.

Were the transfers of Stanford Robinson and Max Hoetzel examples of “Creaning”?

Fans can only speculate because neither Crean nor the transfers are going to admit to either being told to pack if they were “Creaned”.  No player will talk about the misery a coach brings upon him because the coach can help him find a new home, and once a player graduates, a coach scorned will not choose to advocate for the young man with a potential employer.

And “Creaning” isn’t always communicated honestly.  Coaches might pick a fight with a player, tell the kid he will never play, or employ nefarious psychological ploys to motivate his resignation, so who knows who or what truly happened.

There was virtually no doubt that Crean didn’t want Robinson back, and Robinson seemed disinterested in staying.  Hoetzel was a different deal.  He was nowhere near the least talented Hoosier, and if Crean wanted to recover a scholarship there were other more likely targets.

With other players being targeted including Thomas Bryant and Thon Maker, the exodus may continue, and then fans will have a better sense of who leaves for what reason when all the silt settles.