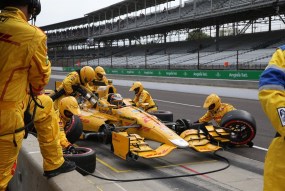 Chevy versus Honda: Just past the quarter pole of the Verizon IndyCar Series season, Chevy’s dominance stood out on the road courses. Honda’s lack of results stood out, as well, and left teams frustrated.

If you aren’t Graham Rahal and Rahal Letterman Racing right now and you are a Honda IndyCar Series team, you are certainly searching for answers and hoping for better days on the ovals. Because other than Rahal, who has piloted his Honda to two outstanding second place finishes in the Grand Prix of Alabama and the Angie’s List Grand Prix of Indianapolis this past Saturday, other Honda teams have had more questions than answers with the road course aero package.

“I don’t remember being this far off in a while,” Andretti said after failing to make it out of round 1 of knockout qualifying Friday, a result  that sent him to the back of the grid for the start of the Grand Prix. “Normally, we could see our way out. I don’t really see a light at the end of the tunnel right now.”

Andretti did everything he could do to muster a 16th place finish in Saturday’s race. Two Hondas – Rahal and Takuma Sato of ABC Supply AJ Foyt Racing  – finished in the top ten.

“I wish we had more to talk about,” Andretti said after the race, exhausted and still searching for answers. “These are hard fought horrible results.”

What Rahal’s success has done, though, is make excuses excuse-less. Marco Andretti knows that; he said that. Andretti Autosport knows that. But, as Andretti pointed out to me Saturday, there’s no denying the lack of speed down the straightaways caused by too much drag – seven to ten miles per hour compared to the Chevys by Andretti’s calculations.

Too much drag is a real drag on long straightaways like the Indianapolis Motor Speedway road course. And it certainly doesn’t work well on the famed 2.5 mile oval.

But the aero package is one thing. It’s time to turn the page. The real question right now is with the attention turning to the oval and the Indy 500, will things be different for Honda teams and their superspeedway aero kit – a completely different kit that used this past weekend?

With only one day of testing so far (May 3), teams still don’t know exactly what they’ve got with their oval package. Teams may be singing a completely different tune the rest of the month.

When you’re a team like Andretti Autosport, who has won multiple Indy 500s (including last year’s ‘500’ with Ryan Hunter-Reay) and a driver like Marco Andretti, who has come so close to winning one, staying positive and understanding what the ultimate goal is in May is what you have to do. Andretti knows that and he’s shown that. Upon exiting his No. 27 Snapple car after a very frustrating day Saturday, Andretti walked around the car and one-by-one shook the hands of every crew member who worked as hard as he did to muster a 16th place finish. Right then and there, one chapter of the Month of May was ending and another was beginning.

Perhaps light will shine through the tunnel, after all, when it’s desired most – May 24.

“We have to keep positive.” Andretti added Saturday. “I just need to look forward and look to the Indy 500, because as bad as things are right now I have to remind myself that we could be Indy 500 champs in a few weeks.”