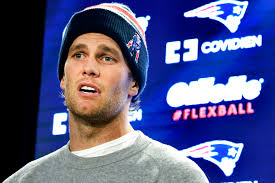 Tom Brady is pretty, a champion, and one of the best quarterbacks of all-time. He is also a cheater, and should be treated like one.

The NFL has no problem suspending players for extended periods because they get stoned, but a cheater is now expected to earn only a two-to-four game suspension for violating a rule that resulted in his team gaining a significant competitive advantage.  Yeah, that makes sense.

Mirroring our criminal justice system, addicts are punished beyond logic for their inability to combat the compulsion to harm themselves with both illegal and legal drugs.  Cleveland Browns wide receiver Josh Gordon sat 10 games in 2014, and will sit the entire 2015 season because he has routinely tested positive for recreational intoxicants that provide no competitive advantage whatsoever.

Brady’s cheating is like the crimes being committed in the American banking industry.  Middle class financial security is sacrificed for the mind-boggling wealth of amoral cash fiends who buy loopholes through giant donations to the PACs of political candidates.  Crack addicts go to jail for years, while bankers stockpile hundreds of millions of dollars.

The NFL has no problem negotiating a collective bargaining agreement that allows players to be expelled from the league for testing at an absurdly low level for pot, but changing the competitive balance of the game is worthy of a two-to-four game rip?

It’s very likely that for years Brady has been complicit in a systemic alteration of game balls to be used by the Patriots offense.  The result hasn’t simply been to make it easier for him to throw the ball, but for the Patriots ball carriers to hold on to it.

Since 2010, according to Warren Sharp’s post on fumble likelihood, the Patriots have averaged one fumble for every 185 offensive plays.  The NFL average is 105 plays/fumble.  During the same period (2010-2014), the second best team in the NFL at securing the ball is Houston with 140 plays/fumble.

This table shows how the Patriots under Bill Belichick gained great improvement in 2007 after teams were allowed by the NFL to provide their own offensive balls. (reprinted from www.sharpfootballanalysis.com)

The odds of operating at this level of fumble frequency through happenstance, according to Sharp’s post is once in over 16,000 seasons.

If you look at that chart and still think this was a harmless advantage gained by a team whose quarterback wanted a slightly softer ball so he could spin it a little better, you simply aren’t paying attention.

You might be thinking that the Patriots front office is a savvy group of football guys, and that maybe they have developed a system to acquire and employ players who are less likely to fumble.  There is no occurrence more disruptive to a team’s ability to win than turnovers, so drafting and signing players with sticky fingers would provide a huge statistical advantage.

Sharp debunks that likelihood in another exhaustively researched post that shows the Patriots are 88% more likely to fumble after playing for the Patriots than during their time in New England.

Deflategate is a simple case of a cheater – or organization of cheaters – working outside the rules to improve their odds of winning in a way that is downright Nixonian.  The use of the suffix “gate” has exploded to an exhausting level, but in this case, it’s absolutely appropriate because of its similarity to Watergate (the first “gate”).

A team good enough to win without cheating (Nixon would have been re-elected in 1972 regardless of dirty tricks, plumbers, cover-ups, Haldeman, Ehrichman, Mitchell, and Dean) defies the rules in a way that is scientifically provable and beyond question.  They get caught, and the party in question denies everything despite mounting evidence to the contrary.

The New Orleans Saints lost an entire season and the franchise’s arc was forever altered because of Bountygate.  Players who go one toke over the line are banished for four games and then an entire year as punishment levels escalate.  What is a just debit for a quarterback like Brady who directed locker room attendants to provide his team such a profound advantage?

If not a year, then it should be more.  Talk of a two-to-four game rip denies the seriousness of the crime and the damage done to the NFL shield.

The message to be taken by young men and women from professional sports should be that hard work yields a positive result.  The message the NFL will send a generation of kids if they give Brady and the Patriots a pass for Deflategate is that white collar crime is just fine.

Forcing Brady to sit for a full season would send a message to NFL players, employees and fans impressionable enough to learn from the mistakes of their fallen heroes.