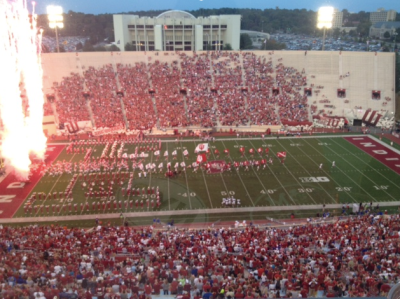 Embarrassing crowds like this one will be less likely if the parties outside on football Saturdays are allowed to continue in Memorial Stadium.

Logic is creeping ever closer to college athletics.

First, the board chair of division one athletics tells CBS Sports Jon Solomon he does not favor appealing a potential ruling 9th Circuit Court of Appeals in favor of Ed O’Bannon in a lawsuit seeking compensation for the licensing of college athletes.  Now, the new president of the University of Texas comes out in favor of selling beer at football games.

What would selling beer mean for Indiana University football?

Students and adults would be more likely to leave their tailgate party to continue the revelry in the stadium while watching the Hoosiers.

Profits for the athletic department would soar.

I like the giant flagpole, fireworks, and the little field for kids, but for the thousands of alums who for the past 20+ years have enjoyed a couple of beers among friends outside the football stadium on a beautiful autumn afternoon, rolling into the stadium for a four-hour death march seemed dumber and dumber.

Indiana’s football team might be better this season, but over the past 20, partying among friends and a strange sense of loyalty to a terrible product have been the only reasons to attend Indiana football games.  More and more have chosen to remove the part of the afternoon or evening that featured neither winning nor beer.  A Saturday with one or the other is fine, but without either, the choice to abandon ship has been increasingly popular.

This isn’t about allowing Memorial Stadium to become Camp Run-amok with students drinking 15 beer bongs each in a duel for Greek pride; it’s about people behaving in the same exact way that occurs regularly at every NFL and Major League Baseball Stadium in America.

This is profiting from (mostly) responsible adults being given one less reason to watch the game on TV at their tailgate rather than use their tickets to see some football in person because after two beers in the parking lot, four hours of sitting quietly on a bleacher makes them feel like taking a nap.

If Indiana (or Texas) doesn’t want to provide a marketplace with the supply to meet demand, the demand will be (and is) met elsewhere – as it has been since the beginning of time.  Even the most localized prohibition doesn’t work.

Let the beer flow, and the profits from massive fan satisfaction will follow.

Make the in-stadium experience of Indiana football games a continuation of the best times for fans (the three hours before kickoff) on those gorgeous September and October Saturdays, and fans will flock to the games rather than continue endless games of hacky-sack and flippy cup in the south lot.

If safety or public drunkenness is an issue, limit sales to Michelob Ultra, a beer so lacking in actual beer that drinking enough to kick it over the edge is nearly impossible.  An airtight case can be made that beer is a safer alternative for students than what they smuggle in anyway.

The decision to serve beer at IU football games is one of those no-brainers without a downside.  Fans will be pleased.  Ticket sales and/or use will increase.  Profits will rise.