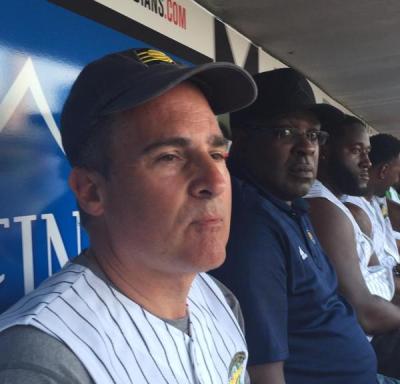 Pacers broadcaster Chris Denari and Quinn Buckner intently watch as our Pacers team lost on a night when everyone won.

Defensive game changer Robert Mathis is a key component to the Super Bowl hopes of the Indianapolis Colts as he returns from a torn Achilles tendon that caused a lost 2014 season for the potential hall of famer.

Mathis pitched for his team filled with Colts and media members in the Indiana Children’s Wish Fund’s Celebrity Softball game, and I played with the Pacers.  His team put up seven runs in the bottom of the first, and the Pacers needed baserunners when I came to the plate in the top of the second with a runner on first.

Thinking the right fielder would most likely be asleep, the least talented player on the field, or both, I decided to slap a ball his way.  Mathis’ first pitch was perfect to inside out the other way, but I missed it by a hair, and it spun foul.

Before I came to the plate, I thought how odd it was for men being paid millions by teams with championship aspirations to stand 45-feet from giant men wielding 26-ounce bats capable of launching a softball fast and hard enough to cause serious injuries – like fractured orbital bones.

I asked people in the dugout if this made any sense.  I even asked Pacers coach Frank Vogel whether this seemed like inviting potential trouble by having Paul George pitch for the team he was captaining against Mathis’ Colts crew, “No, not really,” he said with a look that backed up his indifference to the possibility to George taking a shot off the noodle.

I’ve seen pitchers and fielders taken off softball fields on stretchers because a line drive caught them in the face.  It doesn’t happen often enough to see it as anything more than a fluke occurrence, but I’ve seen it enough that I had a concern.

So there I am, down to my last strike in front of 10,000 people much more interested in autographs from Pacers and Colts than seeing me succeed or fail at the plate, but still, there is nothing worse than a media guy who looks like a dope as he competes.

I decided that no matter where Mathis threw the next pitch, I was hacking, and because a foul ball is a strike in softball, all I wanted to do was square it up and smack it up the middle someplace.

Mathis’ pitch was shoulder high but not too high to hit hard.  It was over the middle of the plate, and I knew I could drive it.  I hit it right on the sweet spot of the bat in the very middle of the ball.

The ball rocketed off the bat straight at Mathis.  My heart sunk.  What If I’m the guy who fulfills my own paranoia about the potential injury to a key member of a potential Lombardi Trophy hoisting franchise?  To roam a dugout asking about the potential danger of being a slow-pitch softball pitcher, and then to cause an injury myself would be horrible.  Fulfilling your own prophecy causes raised eyebrows at the minimum.

Mathis reacted with the fast twitch reflexes of an elite athlete – go figure – caught the scorched liner, and calmly threw behind the runner at first to complete the game’s only double play.

I stared at Mathis briefly – like he had perpetrated some competitive offense – and walked back to the dugout.

In the top of the seventh, I walked to the plate for my second AB.  I led off that inning with a base-hit barely past the uber-athletic Duron Carter at shortstop, but before that, I stood at the plate as Mathis strode to the mound.  As he crossed the first base line, he stopped and glared at me.

I was baffled, and couldn’t believe he was looking at me with the same glare he trained on offensive linemen.  I turned to see if Mathis might be staring at someone beyond me, and Rik Smits stood in the on-deck circle.  I looked at Smits – he laughed and shrugged.

The night was filled with laughs for the fans, athletes, and media.  Wish kids ran the bases.  Thousands of autographs were signed.

Robert Mathis almost took a line drive in the chops.  And I dodged infamy – again.