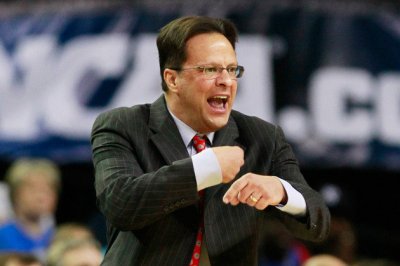 Tom Crean has been guilty of a lot of traveling himself – on the recruiting trail.

If Tom Crean ultimately fails to bring Indiana the banner Hoosier fans have craved to see raised to the rafters of Assembly Hall for 27 years, his recruiting budget will not work as an excuse.

Bringing up the rear of the 12 programs reporting figures (Northwestern is a private school and not required to make public such data, and Pennsylvania law does not mandate Penn State share it either) is Wisconsin, participants in the last two Final Fours, who managed to assemble a quality roster while spending a piddly $62,082.

It seems counterintuitive for a program nestled in the midst of one of the most fertile basketball recruiting areas in the world to need to spend exorbitantly on airfare to go get 13 kids to play at Indiana, but under Crean they do.

This is yet another of many conundrums regarding Crean.  If Crean spent $62K like Ryan, fans and media would carp about him not working hard enough to find the best.  Because he spent so lavishly, critics will hammer Crean for wasting cash to acquire players who have put together a combined 16-22 record over the past two Big Ten seasons.

Choosing to leave Indiana to crisscross the country in search of basketball players is like flying from France to Ohio in search of great wine.  You might find some good ones, but they are likely no better than what is produced in the winery 400 yards from your house.

Whether or not the money is well spent is entirely determined by whether Indiana wins or loses, and over the past two seasons the results have not been good.

A relevant question about Crean’s ability to recruit Indiana at a high level can and should be asked.  Has Crean been forced to recruit elsewhere because coaches and players in Indiana have been worn raw by what they refer to off the record as his brash tactics and arrogance?

There was a time when Crean was able to recruit Indiana, but he took chances on the wrong kids because of measurables – the class of 2012, minus Yogi Ferrell comes to mind.  That time appears to have passed with Southport’s Joey Brunk committing to Butler, and Ryan Cline, Basil Smotherman, and Grant Weatherford at Purdue right now preparing for their freshman season.  Indiana did win the battle for James Blackmon, Jr.

In a vacuum, cracking open athletic director Fred Glass’s wallet to the tune of close to a quarter million dollars more than Indiana’s closest conference rival could be seen as a good thing – evidence of hustle as Crean beats the bushes to find the best and brightest.  Given the lack of recent positive results, Indiana fans look at this as yet another piece to a narrative that continues to evolve into a reason to ask whether Indiana Basketball has been driven into relentless mediocrity from which there is no escape – at least under current management.

Whatever Crean has spent, and whatever results his leadership has produced over the past two years, this coming season will determine his fate.  Expectations are high for the Hoosiers, and if Crean’s eighth team cannot find it’s way into the top four of the Big Ten and a spot in the Sweet Sixteen of the NCAA Tourney, the doubters will have been proven right.