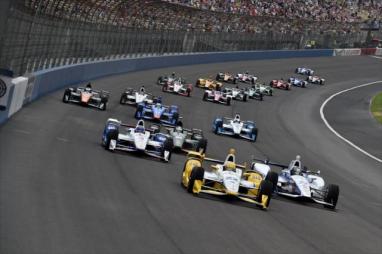 Almost two weeks have passed since I watched one of the most thrilling IndyCar races I’ve seen in quite a while. What brought this back into my consciousness? My son, who just got around to watching it on the DVR, texted me, “That Fontana race was fantastic,” …. “but I can see where some drivers wouldn’t like that.”

His thoughts pretty much summed up the thoughts of many – a tug-of-war of emotions that ranged from excitement to too dangerous.

While watching the MAVTV IndyCar race on my DVR the evening of the race, a friend who rarely watches racing said, “This is phenomenal. If I knew racing was going to be like this all the time, I’d become a race fan.”

An hour later, we heard Team Penske’s Tim Cendric tell us they shouldn’t be out there racing like that. Will Power, after a crash involving Takuma Sato, told us why one of the best races we’ve ever witnessed shouldn’t be happening that way. As much as I thought the series had converted my friend into new fan right in my living room, some figure heads were almost “un-selling” what we had just witnessed – the best race in a long time not called the Indy 500.

Let me preface any more comments with this: I don’t like true pack racing. There’s no place for it in racing and safety always comes first. I am well aware of the desire to not have pack racing. I totally get that and am completely on-board with that. But I failed to see how Will Power’s accident (a typical side-by-side racing pinch job) hasn’t happened on all kinds of tracks before. It was now as if wrecks shouldn’t happen at all at a track like Fontana; like wrecks like that don’t happen on other tracks. There seems to be this false notion that only high speed ovals are dangerous and that the sometimes tight confines of road courses aren’t as dangerous. History would say otherwise over the years. IndyCar drivers smash up their fair share of cars on road courses. Yet,  listening to Power, you would have thought side-by-side crashes only occurred on high-speed ovals.

No, I’m not risking my life at 200+ miles per hour. But I’m also not an elite athlete.  And if this comes across as being insensitive to the safety of race car drivers, I assure you it couldn’t be further from the that. I’m not arguing against safety. And I’m certainly not arguing against drivers being able to speak their minds. We need more of that. Drivers need to be free to speak their minds, show their personality – keep it real. In fact I found the takes of Will Power and Tony Kanaan compared to Marco Andretti, Graham Rahal and Josef Newgarden fascinating – completely different views; I dig that. What I’m arguing against is the fact that this was a true pack race. It was the first time at this track with the new 2015 aero packages. If the series and drivers feel the need to make adjustments, then they need to keeping working on the package and make the proper adjustments.

The Fontana race got termed dangerous pack racing by some drivers, while others didn’t seem to mind it. Graham Rahal said it wasn’t pack racing. Marco Andretti described it as fun out there.  I thought the track was plenty wide enough for drivers to take care of themselves, which they did for a couple of hours. But the notion that wrecks aren’t supposed to happen at all is not logical. How many road/street courses have we seen with plenty of nasty accidents? A crash in a Houston street race a couple years ago sent Dario Franchitti into early retirement. It was a nasty, nasty crash that could have easily been much worse. In the Formula 1 Austrian Grand Prix June 21, one car went over the top of another, barely missing the head on one of the drivers.

If you’re looking for security in racing, you’ll be looking for a long time. But safety has come a long way and continues to evolve in the right direction thanks largely to IndyCar, which is as good as it gets when it comes to racing saftey. Look, I don’t want to see pack racing – for manufactured competition and safety reasons. But what I watched at Fontana didn’t qualify as pack racing in the truest sense that people think of – not to me, anyway. What it did qualify as was one of the most exciting races in IndyCar history.  And for large parts of the race, it was clean  and dicey at the same time  with plenty of room for maneuvering.

IndyCar prides itself on racing at a variety of tracks offering various types of racing. What the Fontana race was to me was a different variety. And what we’ll see this weekend on the Milwaukee Mile (Sunday, 5 p.m. on NBC Sports Network), a track I thoroughly enjoy, will be another type of racing.

So while this race got lumped into the “pack racing” group. I just didn’t see it that way. It was certainly close, intense racing that required – to borrow words of the great NBC Sports F1 announcer, David Hobbs – “Huge attachments.” But there was a lot of room compared to some of the artificial packs of cars we’ve seen in past years. And I felt like everyone took care of themselves most of the race. In fact, it was some of the best display of driving skill and racing I’ve seen. I thought it really showcased the drivers’ skills at the highest level.

As for risk and danger, it looms at every racing corner. I suspect some…some frustration from a few drivers came from the fact that so few were there to watch them put their butts on the line. And some frustration probably comes from the fact that some guys just don’t like this kind of racing, which is totally fine. Mike Conway stepped out of the cockpit on ovals because he didn’t like it. That’s always an option.

One thought on “Heading to into Milwaukee IndyCar Race, I Revisit Fontana”